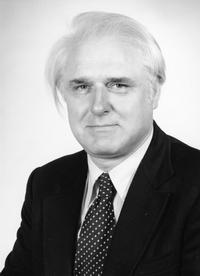 Harold R. Alexander, 77, a former Boeing (Philadelphia) engineer who was instrumental in the development of the V-22 tiltrotor, died January 22, 2008, in Ridley Park, Pennsylvania.  An engineer for Boeing for 28 years, he made many contributions to the knowledge of the dynamics of proprotors. At various points during his career, he managed the early JVX rotor testing in the NASA Ames 40 by 80 Foot Wind Tunnel. A native of Belfast, Northern Ireland, Alexander held degrees from Queen’s University (Belfast) and Trinity College in Dublin. He and his family came to the United States in the early 1960s when he was recruited by Curtiss-Wright Corp. in New Jersey. In 1996, AHS recognized his contributions with the prestigious Paul E. Haueter Award, given for significant contributions to the development of non-helicopter VTOL technologies.