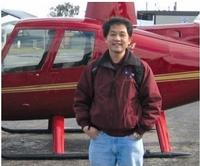 Benton H. Lau was a NASA aerospace engineer and he worked as a team leader in many rotorcraft research projects resulting in multiple NASA Group Achievement Awards. He supported the AHS as a member of the Dynamics Technical Committee. In the Spring of 2008, Mr. Lau’s team of engineers and scientists completed the world’s first full-scale wind tunnel test of a smart-material actuated rotor technology (SMART) rotor. For this achievement, the team won the Society’s 2009 Howard Hughes Award and a NASA medal for Exceptional Achievement. Mr. Lau held a B.S. in Mechanical Engineering from the University of California, Davis, and an M.S. in Aeronautics and Astronautics from Stanford University. Mr. Lau passed away at age 46 on May 28, 2010, after a brief battle with cancer.