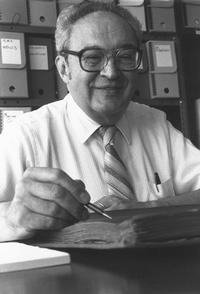 Hal Andrews, a friend and mentor to many in the vertical flight community and a member of AHS since 1969, was a prolific writer, and either authored or co-authored numerous AHS papers and Vertiflite articles over the years.

Born in 1924 in Ithaca, NY, Hal enlisted in the Navy during World War II and served as an aviation electronics technician.  After the war, he got his degree in mechanical engineering at Cornell University and then went to Boeing, where worked on aircraft design, including what would become the B-52 bomber.  With the outbreak of the Korean war, his reserve unit was activated and he served for another two years in the Navy.  He then went back to Cornell and worked at the Cornell Aeronautical Laboratory (now Calspan) where he analyzed captured Soviet aircraft.

In 1955, Hal joined what is now known as the Naval Air Systems Command, or NAVAIR.  He worked initially as an engineer working stability and controls and flight dynamics.  At NAVAIR, Hal held responsibilities for nearly 50 types of Navy or joint aircraft until his retirement from in 1986 as the Technical  Director of Research and Technology.  Although always extremely modest, fellow participants note that vertical flight aircraft such as the AV-8B Harrier II, the V-22 Osprey, and the F-35 Lightning II might never have come into being without his dedication.

Many of Hal's aerospace contributions have been documented at www.HalAndrews.net.

Hal was a recognized expert in Naval aviation history, and a stickler for accuracy.  Beginning in the late 50s, he was a contributing editor and technical advisor in his spare time to the Navy's magazine, Naval Aviation News.  During the past half-century, Hal wrote over 125 articles for the magazine.  In addition, for the past few decades, he was also an advisor to the Association of Naval Aviation's Wings of Gold Magazine, the Naval Aviation Museum's Foundation magazine and the Tailhook Association's The Hook Magazine.  For his work, he received the Admiral Arthur W.Radford Award for Excellence in Naval Aviation History and Literature from the Naval Aviation Museum in 2002.  In 1991, he was awarded a fellowship at the National Air and Space Museum and then continued on as a research associate, spending two to three days a week there as a volunteer for the next 16 years.  He was tireless in trying to ensure the accuracy of the history of aviation and encouraging young people to pursue careers in aerospace.