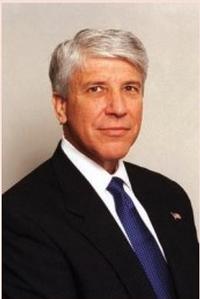 A Navy captain, his 27-year military service included numerous carrier-based deployments, command of two helicopter antisubmarine squadrons (HS-1 and HS-9), and service as Commanding Officer of the Naval Air Station in Jacksonville, Florida. During one deployment, he launched as aircraft commander on a nighttime mission in the North Atlantic to rescue on injured sailor on another ship within the same battle group. Fighting high winds, thick cloud cover and storms that forced him to fly on instruments at just 200 feet above the sea, he safely returned the sailor to a mainland-based hospital aircraft following one of the longest unrefueled over-sea flights ever attempted by a Naval helicopter. Among other honors. He was awarded the Distinguished Service Medal and the Legion of Merit.

On retirement in 1998, his logbook reflected more than 6,000 accident-free flight hours in both fixed- and rotary-wing aircraft.

At Helicopter Association International, he faced many challenges, not the least of which was a major economic downturn in the civil helicopter industry. During his seven years as HAI president, he improved operational efficiency, increased convention and exhibitor attendance at Heli-Expo — the association's annual trade show — and improved HAI's financial health. HAI during his leadership teamed with AHS International on a variety of industry initiatives, including helicopter safety and helicopter infrastructure. In 2006, Resavage received the HAI Lifetime Honorary Membership Award.

According to his obituary in the Washington Post, “At HAl, he worked diligently to promote safety, reduce helicopter accident rates, advocate [for] the establishment of adequate infrastructure worldwide, initiate new programs to enhance the professional standards of training, and advocate [for] building a geographical database to assist in emergency responses to acts of terrorism and national disasters. He also testified before Congress, and expressed industry concerns to federal government and security agencies over post 9/11 restrictions and regulations impacting helicopter operations.”