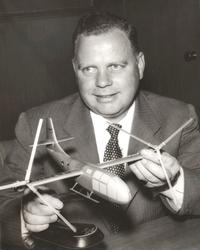 Years after his selection of Floyd Carlson as test pilot for the Gardenville Helicopter Project, Larry Bell, the President of Bell Aircraft, would state, “I think it was one of the most important choices in our history. The helicopter and an able pilot learned to fly together. Floyd probably became the world’s best helicopter pilot, certainly the best test pilot, and he soon attained more flying hours than any other helicopter pilot in the world.”

Floyd Carlson was a true pioneer and major contributor in the early development and testing of a broad-range of cutting-edge vertical flight aircraft. His contributions are numerous. Starting with the birth of Bell Helicopter in Gardenville, New York (1942-1945), he performed the first flight of every helicopter Bell designed and built until 1960. His biography mirrors the early history of Bell Helicopter. During this time, Carlson became one of the most experienced and renowned helicopter test pilots in the world, testing aircraft which included the Model 30 (1942); Model 47 (1945); HSL-1 Tandem Rotor Helicopter (1953); XV-3 (1955), forerunner of the XV-15 and V-22 Osprey tiltrotors; and XH-40 (1956), prototype of the iconic UH-1 “Huey.” Floyd Carlson’s passion for aviation began with the guidance of his older brother Milton, whose tragic accident and death left an enduring impact on Floyd’s life as he continued to develop and master the techniques of vertical flight.

The early history of Floyd William Carlson must include his older brother, Milton Harold Carlson, as both shared a deep love and early devotion to aviation. The brothers were the sons of Swedish immigrants Gust Carlson and Ina Christine Swanstrom Carlson, who settled in Jamestown, New York, which had a large Swedish community. On September 5, 1933, sixteen-year old Floyd took his first flying lesson with his flight instructor, Milton, in a Taylor Cub, at the Jamestown Airport. Thirty days later on October 10, 1933, after 5.5 hours of dual instruction with Milt, he would take his solo flight. On June 22, 1936, Floyd earned his Private Pilot’s License after accumulating 64.15 hours of flight time. And finally, on May 24, 1937, Floyd would also earn his Commercial Pilot’s License. His brother, Milton, was also the operator of the Jamestown Airport and built the first hangar there.

Both Floyd and Milton began working for the Buffalo Aeronautical Corporation in 1940. Based at the Buffalo, New York Airport, Floyd gave flight instruction and worked as a charter pilot while Milton gave both primary and secondary flight instruction. The flying jobs at Buffalo Aeronautical Corporation would eventually lead both brothers to Bell in 1942 as “Flight Research Engineers,” as Bell did not refer to them as “Test Pilots” during this time. The military required all new aircraft to be flown and tested by company pilots before delivery to the government. Floyd had logged more than 2,300 hours and joined the staff at Bell in June with Milton close behind in November. Milton had logged a total of over 3,500 hours in the air, when he left to join his brother. Milton and Floyd flew both development and production fixed wing aircraft: included were cannon-carrying P-39 Airacobra experimental flights and armament tests; initial development of rocket launchers; and P-59 Airacomet jet aircraft flights

At the beginning of WWII, Larry Bell had the incredible foresight to hire a young Princeton graduate named Arthur Young. True, Igor Sikorsky had flown America’s first successful helicopter in 1939, but Young pursued a design concept quite different from the three-bladed rotor systems designed by Sikorsky. Young had started with a two-bladed rotor, simply because he would have one less blade to replace after his models crashed, as extensive model testing was his mode of operation. On November 1, 1941, Larry Bell would sign a contract with Arthur Young. Young was given a $250,000 budget to build two prototypes like his model. Bell was given the patent rights.

As Art Young recalled, “In the spring of 1943, Floyd Carlson was assigned to the project. He turned out to be a very lucky choice because he was extremely enthusiastic. He became skillful quite rapidly and began taking more and more part in the engineering as well as the flying.” Arthur Young gave Carlson credit for correcting a vibration problem with his first helicopter: “It was actually Floyd who came up with an idea to remedy the situation. He suggested putting a brace on the rotor.” Carlson devised a brace to increase the rotor stiffness, which became known as the “Swedish Yoke.” It was a tribute to his Swedish ancestry. This fixed the problem and flights in excess of 70 mph became possible.

The joy experienced by the helicopter team in March with the first commercially certified helicopter would diminish greatly when on Saturday morning August 10, 1946, at approximately 11:00 a.m., Milton Carlson lost his life in the fatal crash of a Model 47. The accident caused Chief Test Pilot Floyd Carlson to redouble his efforts in what some saw as a personal crusade for flight safety. Carlson had unwavering support from Bart Kelley, who was rising to become the head of the engineering department. In future efforts, both Carlson and Kelley would push Bell Helicopter to extraordinary lengths in the pursuit of flight safety.

On May 21, 1951, Larry Bell along with company and Fort Worth dignitaries broke ground for a new plant in Hurst, Texas. A 3.5 million-dollar plant would be built on the 55-acre site. What emerged on that land was the first factory in the world specifically designed to manufacture helicopters. Chief Test Pilot Floyd Carlson and his family would move to Texas in April 1952 to join many of the recently arrived Buffalo transplants. As the new factory in Fort Worth was being completed, development of the Bell Model 61, the Navy’s HSL-1 anti-submarine helicopter, continued in Buffalo. The first helicopters were built at the Niagara Falls factory and later shipped to Fort Worth where Carlson continued to perform all test flights.

In another first for Bell, the XV-3 Convertiplane was un-veiled at the Hurst Plant on February 10, 1955. This ceremony was followed by the first flight of Ship 1 (SN 54-147) in the hover mode only on August 11, 1955, by Chief Pilot Floyd Carlson. This would mark the beginning of tiltrotor technology and testing that decades later would lead to the V-22 Osprey.

On February 23, 1955, Bell won an industry-wide competition for the Army’s first turbine-powered utility helicopter, which eventually became known as the iconic “Huey.” The Bell Model 204/Army HU-1 (later re-designated UH-1) contract was the first all-Texas designed and built helicopter. The first flight of the XH-40 prototype helicopter occurred on October 20, 1956, at the Hurst Plant, with Floyd Carlson as test pilot. Carlson stated, “the smoothest handling new helicopter I ever climbed into.”

Carlson retired from Bell Helicopter after 40 years of service in November 1982. He had logged more than 20,000 flight hours almost equally divided between numerous fixed-wing aircraft in 28 different models and rotary-wing and tiltrotor aircraft in 38 different models. Less than 17 months later, Floyd Carlson passed away on April 9, 1984, a month shy of his 67th birthday. He had lived in Fort Worth for 32 years. Carlson was survived by his wife, Evelyn Newberg Carlson, whom he married on November 10, 1940, and three grown sons: Blair, Todd, and Rand.

His funeral service at Lucas Funeral Home Chapel in Hurst, Texas, and burial in Bluebonnet Hills Memorial Park in Colleyville, Texas, on the twelfth of April was marked by a flyover of five different Bell Helicopter models, ending with the “missing man” tradition performed with the last helicopter flown by Carlson.