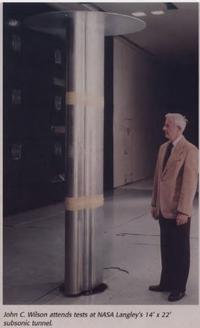 A graduate of Massachusetts Institute of Technology and World War II US Army vetern, John C. Wilson, had worked at Kaman Aerospace, Grumman and Sikorsky Aircraft before embarking on a 24-year career at the Army Aeroflightdynamics Directorate at the NASA Langley Research Center. During his career he received Army's Research and Development Achievement Award in 1981 and again in 1993, the NASA Exceptional Service Medal in 1990 and NASA's Research and Development 100 Award in 1992.  He held patents for his research in reducing the heat signature of helicopter exhaust systems and helicopter boom strake design. John Wilson was an active member of AHS Design Committee; the Test and Evaluation Committee; and the Aerodynamic Committee.  Lately in his life, he was consulting for Dynamic Engineering.