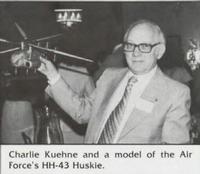 Charles W. Kuehne was an AHS member since 1962 and served as the president of the Dayton Chapter.

Charlie Kuehne was closely associated with the pioneers of rotary wing flight.  As a US Army lieutenant, he began his career in rotary wing aircraft in 1943 at New York University under Dr. Alexander Klemin.  In 1944, he received his MS degree in Aeronautical Engineering, specializing in rotary wing aircraft.  Upon completion of his active duty as a supervisor at Helicopter Mechanics School, Charlie was employed by the Air Force at Wright-Patterson Air Force Base to help develop Army and Air Force helicopters. He had technical responsibility for direction and overall management of numerous helicopters and V/STOL transport-type aircraft developed since 1946.  These included the Kellett XR-8 and XR-10, Firestone XR-9B, Piasecki XH-16, Hughes XH-17, Bell H-40 (UH-1), Vertol CH-47, McDonnell XV-1 compound helicopter, and Bell XV-3 tilt-rotor airplane.  Later, in his position as Director of Support Programs and Projects, Charlie was involved in the development of fixed-wing aircraft trainers, transports, and liaison types such as the T-38, T-39, C-130, C-140, and L-19.