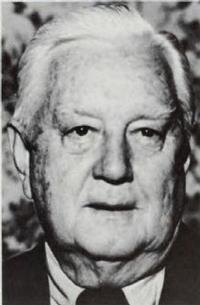 Robert L. Suggs, Chairman of the Board and CEO of Petroleum Helicopters, Inc. - the world's largest private helicopter company.  Born in Toronto, Suggs was raised in San Antonio, Texas. He earned his B.S. in electrical engineering from Texas A
& M University, and his master's from the California Institute of Technology in 1933.

Suggs worked for the Humble Oil & Refining Co. (now Exxon) from 1936-1940 as a geophysical supervisor in the Far East.  During World War II, he served in the Army Air Corps, achieving the rank of colonel.  At the time of his discharge, Suggs was assistant chief of staff for the Eastern Air Command.  He received the Bronze Star.

In 1946, Suggs, along with Maurice Bayon, founded Offshore Navigation Inc.  In 1949, Suggs, Bayon, and Jack Lee formed Petroleum Helicopters, Inc. In the 40 years under Suggs' leadership, PHI has grown from 3 helicopters to more than 300 aircraft, operating worldwide.  PHI employs more than 2,300 people, and has logged over 6.5 million flight hours.

Among his many honors and awards, Suggs was presented the prestigious Medaille de L'Aeronautic at the 1981 Paris Air Show.  He received the AHS William J. Kossler Award in 1957.  The HAA gave him its L.D. Bell Memorial Award in 1971.

Mr. Suggs died at his home in Metairie, Louisiana on September 4.  He was 77