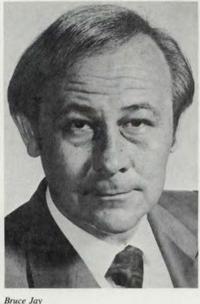 A 1959 graduate of Boston University, with a B.S. degree in communications arts, Mr. Jay was active in local community groups, including the Delaware County Chamber of Commerce, Delaware Valley Council, and Pennsylvania Chamber of Commerce. Bruce died at his home in Philadelphia on March 27, 1988, of an apparent heart attack. Mr. Jay was 50.