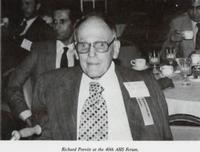 Prewitt was the AHS vice president from 1947-1948, he got his start in the industry with Kellett Gyrocopters Co. in 1931.  As vice president and chief engineer he was responsible for the design and testing of many gyrocopters including the commercial KD-1, the Airmail KD-1A and the military YG-1, YG-1A, YG-1B, YG-1C, XR-2 and XR-3.

In 1946, Prewitt established his own company: Prewitt Aircraft Co.  the company was involved with the research and development of rotor blades and their production.  Prewitt held 25 patents on gyrocopters and helicopters. Richard Prewitt died on August 11, 1985 he was 84.