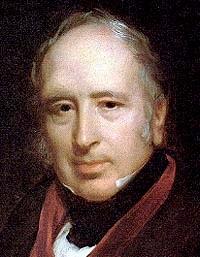 Sir George Cayley, a baronet who had inherited farmlands in Yorkshire and Lincolnshire, unlike many of his contemporaries who devoted their life to the pursuit of leisure, occasioned by a generous annual stipend, he was an active participant in a group called the ‘Non-conformists’ who believed that those blessed by privilege had the opportunity, even a special obligation to foster progress.  His long life was distinguished by engineering innovation and theoretical insight including the invention of caterpillar tracks for tractors and tanks, self-righting lifeboats, seat belts, automatic signals for railroad crossings, and lightweight spoke wheels (conceived for landing gear for airplanes, Cayley’s invention would lead directly to the modern bicycle wheel). And along the way, as many landed-gentry, Cayley would serve in Parliament, but, unlike many, he actively joined in the anti-slavery movement.  The many interests of this 'amateur scientist' included  “the design of theaters, theoretical aeronautics, the rights of labor, the construction of steam  engines, and the design of artillery shells.”  And, almost as a footnote to his life, Cayley helped found the Polytechnic Institute of London.  He also worked out the principles of manned flight, an engagement that began with the creation of his version of the Launoy/Bienvenu ‘helicopter’ in 1793 at the age of 23. It was the start of a life-long fascination with flight, later described  as “his first experimentation with aerial navigation.”

Cayley, who had read of the French experiment of twelve years earlier, duplicated the helicopter with two-hours’ work which was constructed of:

“ . . . two corks with four feathers stuck in each.  The feathers, mounted horizontally at right angles to one another, were twisted slightly to give them the necessary ‘angle of attack’.  The two corks were joined by a round stick and were contra-rotated by a bowstring mechanism; this was wound up by turning the corks in opposite directions, after which the model was placed on a table with the operator’s finger pressing firmly on the upper cork to prevent the string from unwinding.  When the finger was removed, the bowstring unwound rapidly and gave a rapid rotary motion to the cork-and-feather assembly – and the model rose to the ceiling.”

Cayley also drew inspiration from his observations of nature—recording “in his notebook in 1808 his fascination with the autorotation of the sycamore chat, the seed-bearing leaf which glides like an autogyro to deposit the seed at a practical distance from the tree.” Cayley noted:

“It is so formed and balanced that it creates a rotative motion meeting the air in a very small angle like a bird’s wing, and by this means the seed is supported [to] fly 60 yards before it reaches the earth.”

Cayley was a 19th century ‘practical engineer and a pragmatic scientist’, proceeding from observation to experimentation, methodical in his approach – he deduced that general shape of wings from observations of birds, but then went on to construct a “whirling arm” to test wings (his first wing was modeled on the crow) – the wing was attached to the whirling arm which was powered by a weight that pulled on a string wound around the pole to which the arm was fitted.  As the weight unwound the spiraled string, the pole turned and the arm to which the model wing was attached rotated – and Cayley’s studies of how air flowed past objects were the beginning of the science of aerodynamics. Cayley was able to accurately describe the problems associated with flight:  lift, drag, weight, and thrust—Cayley was aware, as many others, of the lifting of a kite when wind was forced against it or the movement of a boat when the wind blew against the sails—Cayley was the first to discern that such a lifting force would be generated if the wing moved through the air.  His research with various wings attached to the whirling arm lead to workable solutions to the issue of the correct angle of the wing (‘angle of attack’) in the airflow to generate life, and how to stabilize that angle.

In 1809–10, Caley published a series of papers, drawing primarily from his research and correspondence with contemporary scientists,  under the collective title “On Aerial Navigation” in Nicholson’s Journal of Natural Philosophy, Chemistry and the Arts, writings that were not acknowledged at the time but are now recognized as setting forth the basis for the study of aerodynamics, dealing with the problems he had identified – first scientific description of flight and the problems inherent in achieving manned conquest of the air.  But while Caley was the first to describe the issues, the technology of his time was inadequate to overcome the problem of sufficient power to achieve flight.

Cayley, now largely remembered for his contributions to the understanding of fixed-wing flight, built two man-carrying gliders – the first such aircraft.  The first full-size glider flew in 1849, initially with ballast, but then with the ten-year-old son of one of his servants – the first person to fly.

In 1843 Cayley returned to the design of a helicopter and published a design for a boat-framed helicopter which he called by the fanciful name “Aerial Carriage” (Mechanics’ Magazine, April 8, 1943) –  his design featured two sets of rotors – a larger one for lift and a smaller one for propulsion.  Of greatest importance, Caley clearly envisioned the helicopter in terms of utility when he wrote in a letter published in Mechanic’s Magazine in 1843:

“Aerial navigation by mechanical means must depend upon surfaces moving with considerable velocity through the air, but these vehicles will ever be inconvenient, not to say absolutely inefficient . . . for, to be of ordinary use, they must be capable of landing at any place where there is space to receive them, and of ascending again from that point.  They should likewise be capable of remaining stationary, or nearly so, in the air, when required”

In the years just before his death, Cayley again considered the issue of rotary flight and during 1853–1855 applied for a patent for an improved helicopter design with an innovative three-bladed metal rotor, the first such use of metal in aeronautics, rotated by a string-pulled shaft – a “Chinese top” of considerable engineering sophistication.  With the pen-and-wash drawings of the toy helicopter, Cayley provided launching instructions that clearly demonstrated his experimentation.  He wrote:

“When directed obliquely upward in an angle of about 23 degrees with the ground, its flight will be nearly horizontal for a considerable distance; and then, by the flyers losing a proportion of their propelling power, the constant gravitation of the spindle prevails, and directs the flight upward in a very graceful curve.”