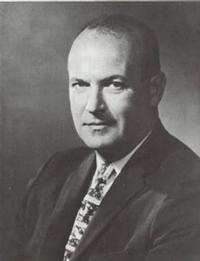 Charles J. (Charlie) Trees, a native Hoosier was born in Noblesville, Indiana, educated in Indiana, graduating from Purdue University in 1937 with an M.E. degree.  Charlie served as a Director on the Executive Board of the AHS for many years, as well as National Membership Chairman in 1959-60.

Enlisting in the US Army in 1940, he served in both the European and C.B.I. Theater of operations.  When he left the service in 1947, he held a Reserve rank of Lieutenant Colonel.  He was awarded the Certificate of Merit by the British government for outstanding service as a paratrooper in the Office of Strategic Services.  His memberships included Rotary International, the American Legion, and the Twirly Birds. Charlie will be remembered for his hospitality through the years at Northeast Regional Clambakes.  Charles J. Trees died on August 5, 1965 in New York City of a heart attack.  He was 49.