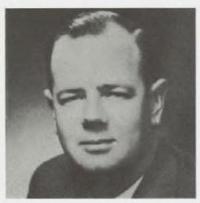 Robert C. Williams was born in West Hartford, Connecticut, and attended St. Joseph's Seminary in Bloomfield, Conn.  He was purchasing agent of the Kaman Aircraft Corp. from 1951 to 1955, when he moved to New Jersey.  He was also president of RAF of Midland Park.

Robert C. Williams, management consultant and president of Williams Associates of East Paterson, N.J. died of heart attack on September 13, 1965.  He was 47.