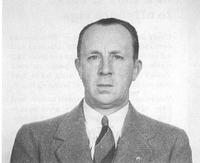 Serge Eugene Gluhareff was a pioneer designer of amphibious planes and helicopters with Igor Sikorsky.

Mr. Gluhareff and his brother, Michael, held patents on dart-shaped aircraft designs, came to the United States in 1924 and both joined the Sikorsky Aero Engineering Corp., in Westbury, Long Island as engineering draftsmen. Born in St. Petersburg, Russia, the two brothers built and flew their own gliders in Finland where they lived and went to school from 1919 to 1924.

On his retirement for reasons of health in 1954, Mr. Gluhareff held the position of assistant engineering manager of the Sikorsky Aircraft Division of United Aircraft Corp.  During his long association with the pioneering designer, Igor Sikorsky, Mr. Gluhareff was engineering supervisor at the Sikorsky plant in College Point, L. I., then executive engineer and later assistant engineering manager in charge of research and development at Stratford.

He was project engineer for development of the first successful single-engine amphibian built in the United States, the S-39, which came out of the Sikorsky plant in 1928.  He was also project engineer on the first four-engine "Clipper" flying boats built for Pan American Airways in 1930, the S-40, S-42, and S-44, as well as the twin-engined S-34 and S-36 used by the United States Navy in the early '30s.

Mr. Gluhareff took flying lessons at Roosevelt Field on Long Island in 1925 and held pilot certificate number 1295.  After his marriage in 1941, he stopped flying except for testing the early Sikorsky helicopters which he helped develop.  He and Mr. Sikorsky made many test flights over the fields of Stratford in the VS-300, the first helicopter to be flown successfully in the Western Hemisphere.