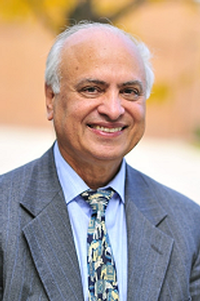 Dr. Inderjit Chopra is a Distinguished University Professor and Alfred Gessow Professor in Aerospace Engineering and Director of the Alfred Gessow Rotorcraft Center at the University of Maryland. Also, he was the Minta-Martin Research Professor from 1996 to 2000.

Dr. Chopra completed B. Sc. Aeronautical Engineering from Punjab Engineering College, Chandigarh, India, in 1965.  He passed M.E. with Distinction in Aeronautical Engineering, with a thesis on: “A Study of Some Problems in Panel Flutter“, from Indian Institute of Science, Bangalore, India in 1968.  Dr. Chopra completed Sc. D. in Aeronautics & Astronautics, with a thesis on the topic of: “Nonlinear Dynamic Response of Wind Turbine Rotors“, from Massachusetts Institute of Technology in 1977. Then he joined the NASA Ames/ Stanford University Joint Institute of Aeronautics & Acoustics, where he worked for four and half years on the development of aeroelastic analyses and testing of advanced helicopter rotor systems.

In 1981, he joined the University Maryland as an Associate Professor and got promoted to Full Professor in 1986. Dr. Chopra has been working on various fundamental problems related to aeromechanics of helicopters including aeromechanical stability, active vibration control, modeling of composite blades, rotor head health monitoring, aeroelastic optimization, high advance ratio rotor, coupled rotor-body-engine dynamics, smart structures, swashplateless systems, micro air vehicles, and comprehensive aeromechanics analyses of bearingless, tilt-rotor, composite coupled, servo-flap, coaxial, compound, teetering and circulation control rotors.  His direct graduate advising resulted in over 50 Ph.D. and about 100 M.S. degrees, and his students are now playing important roles in rotorcraft industry, academia, and federal labs. He acted as the Department Chairman from 1988-1990 and 2009-2010.