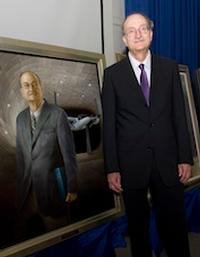 Dr. Wayne Johnson worked at the US Army Aeromechanics Laboratory from 1970 to 1981.  He was with NASA from 1981 to 1986, including several years as Assistant Branch Chief. Dr. Johnson founded Johnson Aeronautics in 1986, where he developed rotorcraft software. Since 1998, he has worked at the Aeromechanics Branch of NASA Ames Research Center.  Wayne Johnson's tenure at Ames has coincided with the center's elevation as a world leader in rotary wing technology. The software he has written – the Comprehensive Analytical Model of Rotorcraft Aerodynamics and Dynamics (CAMRAD) II and the NASA Design and Analysis of Rotorcraft (NDARC) – have become the principle design tools for rotorcraft worldwide. His research activities have covered a wide range of topics in rotorcraft aeromechanics that include dynamics, aerodynamics, controls, handling qualities, acoustics, computational fluid dynamics, aeroelasticity, data acquisition and analysis, and test techniques associated with helicopter rotor testing in wind tunnels. He led development of dynamics, aerodynamics, performance, whirl flutter stability, and flight stability analysis for tilt-rotor aircraft. He spawned a new area of research by coupling the computational fluid dynamics of rotors with their aeroelastic structural dynamics.

He is a Fellow of the American Institute of Aeronautics and Astronautics (AIAA) and the American Helicopter Society (AHS) and received a U.S. Army Commander’s Award for Civilian Service, NASA Medals for Exceptional Engineering Achievement and Exceptional Technology Achievement, the AHS Grover E. Bell Award, the Ames H. Julian Allen Award, the AIAA Pendray Aerospace Literature Award in 1986 for his magisterial textbook, 1128 pages, “Helicopter Theory” (1980).  Dr. Johnson received the 2010 Alexander A. Nikolsky Honorary Lectureship for a distinguished career in vertical flight research – the highest honor awarded by the American Helicopter Society.  Dr. Wayne Johnson presented his lecture, “Milestones in Rotorcraft Aeromechanics” during AHS Forum 66 to a packed audience.

In the image shown Wayne Johnson standing beside his portrait, which depicts him in the National Full-Scale Aerodynamics Complex with an XV15. The XV15 was the precursor to the V22 Osprey and was made possible by Johnson's mathematical models to predict and avoid aeroelastic instability in tilt rotorcraft.