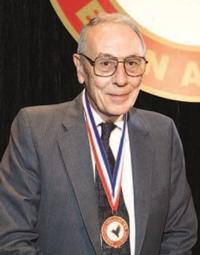 Franklin DeWitt Harris (born December 9, 1934) is a designer of helicopters and author of rotorcraft textbooks. He has conducted pioneering research in rotorcraft aeromechanics. At Bell Helicopter he led the development of the OH-58D Kiowa that serves in the U.S. Army aviation fleet. For the past fifty years, Mr. Harris has built the bridge between U.S. government-conducted and government-sponsored fundamental research and its application by industry’s designers and manufacturers. His service to advancing the field of vertical flight aeronautics is unmatched over the past 50 years and he has been the recipient of several international awards.

Mr. Franklin D. Harris graduated from Rensselaer Polytechnic Institute, the nation’s oldest technological research university, with a Bachelor of Science degree in Aeronautical Engineering in 1956. He joined the Boeing Vertol Company in June 1956 and for thirteen years worked as a helicopter performance analyst, aeroelastic loads engineer, advance rotor airfoil developer, and rotor blade designer specializing in fiberglass composite materials. From 1969 to 1974, Mr. Harris was the Manager of the newly completed Boeing V/STOL Wind Tunnel Complex conducting research and development of rotorcraft through design, construction, and testing of small-scale helicopter and VTOL wind tunnel models. From 1974 to 1976, Mr. Harris was the Boeing Vertol Director of Research and Development and in 1976 became the Program Manager for the development of a new helicopter bearingless main rotor system that successfully flew on a BO-105 helicopter under a U.S. Army-sponsored effort. From July 1977 to January 1992, Mr. Harris held many positions at Bell Helicopter including Manager of Preliminary Design, Engineering Director for the Army Helicopter Improvement Program leading to the development of the OH-58 Kiowa scout helicopter, and Deputy for Technology and Advanced Development. His final position with Bell Helicopter was Vice President of the LHX SuperTeam Engineering leading engineering groups from both Bell Helicopter and the McDonnell Douglas Helicopter Company. Since retirement from Bell in 1992, Mr. Harris has served as a consultant and collaborator for many U.S. Government initiatives in close cooperation with the U.S. Army Aviation Development Directorate Aeroflightdynamics Directorate, AMRDEC, and the National Aeronautics and Space Administration.

Applied Research and Aircraft Development: Mr. Harris was a technical leader and manager of major aircraft design and development programs. He is best known for his leadership in the developing the Bell Helicopter OH-58D Kiowa scout helicopter with its distinctive mast-mounted sight. This aircraft entered U.S. Army service in 1985. The OH-58D Kiowa led to international military sales and a subsequent significant upgrade to the Kiowa Warrior platform with weapon pylons on both sides of the aircraft. Mr. Harris was subsequently appointed to be the technical leader and manager of the Bell Helicopter/ McDonnell Douglas Aircraft Company/McDonnell Aircraft Company Light Helicopter Experimental (LHX) Program candidate design for the U.S. Army. The SuperTeam, under Mr. Harris’ direction, developed an advanced four-bladed bearingless main rotor and a NOTAR ducted tail rotor, with the entire aircraft (wind tunnel model) successfully tested at one-half-scale in the world’s largest wind tunnel complex.

Helicopter Safety: With the increasing focus on operational safety aspects of civilian helicopters, Mr. Harris was the first to separate fact from fiction in a structured and comprehensive manner (NASA TM 2000) working closely with NASA and Army researchers. This definitive work was based on thousands of NTSB aviation accident reports. This research was expanded and lead directly to Mr. Harris’ 2006 American Helicopter Society International (AHS) 26th Alexander A. Nikolsky Lecture and resulting article (AHS Journal, 2007). In this seminal work, Mr. Harris identified the technologies necessary to dramatically reduce helicopter accidents and more importantly he listed ten actions that could be taken immediately by the rotorcraft community to improve safety for all vertical lift aircraft.

Helicopter Operational Cost Modeling: Using his understanding of the helicopter industry and how helicopters were designed, manufactured, and used, Mr. Harris was the first senior industry leader to openly research and publish comprehensive cost drivers in helicopter costs for purchase and operation (AHS Vertical Lift Aircraft Design Conference, 1995; AHS Journal 1997). When economic competitiveness versus other aircraft alternatives became the cornerstone of future civilian rotorcraft market growth, Mr. Harris researched and prepared a comprehensive commercial airline operational cost model based on 40 years of Department of Transportation records for 67 airlines (NASA CR, 2005). This work was driven by the need to understand the economics of the commercial airline industry. If civilian rotorcraft were to expand and compete into existing civilian markets served by commercial airlines, fundamental understanding of the cost drivers in these existing business models must be understood.

Bell Helicopter Textron Inc.–July 1977 to January 1992: Frank Harris joined Bell in July 1977 and was Chief of Aerodynamics Technology until October 1979. From October 1979 to June 1980, as Manager of Preliminary Design, he helped establish firm directions that both helicopter and tilt-rotor product lines would take in the future. Particular emphasis was placed on the light helicopter product line that led to a four-bladed Model 406L light twin helicopter and the OH 58D. From June 1980 to March 1986, he was Director, AHIP Engineering. This Army Helicopter Improvement Program developed the OH 58D scout helicopter. The aircraft and the program are pointed to as one of the best (on schedule, within budget, and met spec) examples of Army aviation procurement. As chief engineer, Mr. Harris directed the overall technical approach and engineering business for BHTI and guided the engineering efforts of the team members who provided major subcontracting efforts to the program. From March 1986 to January 1988 he was part of a broad program to develop succession potential within the BHTI Engineering Department. The initial position was Deputy Senior Vice President, Research and Engineering and then later as Deputy for Technology and Advanced Development, reporting to the Senior Vice President, Research and Engineering. From January 1988 to January 1992, he was the Vice President of LHX SuperTeam Engineering which required him to lead the engineering groups from Bell Helicopter Textron, McDonnell Douglas Helicopter Company and McDonnell Aircraft Company. The SuperTeam formed by these three companies competed against a team formed by Sikorsky Aircraft Company and Boeing Helicopter Division to win a program that would develop a new prototype Army helicopter. The Army awarded the program to the Boeing/Sikorsky team on April 5, 1991, on the basis of lower cost and better supportability aspects.

Consultant–January 1992 to Present: Upon retirement from Bell, Mr. Harris became associated with NASA/U. S. Army rotorcraft activities at NASA Ames in California. Currently, he spends several weeks a year at Ames and additional time at home working on technical studies funded by the NASA/Army group. He maintains an active consulting practice helping both major and minor aerospace companies.

Awards: Mr. Harris has received numerous recognitions from the American Helicopter Society and NASA. In 1980, Mr. Harris was elected as an AHS Honorary Fellow. In 1986, Mr. Harris received the AHS Grover E. Bell Award for his development of the OH-58D scout helicopter. As Chief Engineer he directed overall technical approach and engineering business for Bell Helicopter and guided engineering efforts of team members including major subcontractors. Mr. Harris received the 2006 26th American Helicopter Society Alexander A. Nikolsky Honorary Lectureship. The Lecture entitled “No Accidents — That's the Objective,” was delivered in May 2006 at the 62nd Annual Forum of the American Helicopter Society in Phoenix, AZ. The lecture provided an historical perspective for viewing rotorcraft accidents using FAA and detailed NTSB records. With Mr. Harris’ broad perspective on helicopter design, manufacture, and operations, Frank concluded not with recommendation, but with a specific list of 10 immediate actions that should be taken to dramatically reduce rotorcraft accidents. In 2009, Mr. Harris received the NASA Public Service Medal, the highest form of recognition awarded to any non-Government individual whose distinguished service has personally contributed to NASA’ advancement of United States’ interests. The short citation for the Medal read “for technical leadership, research, and collaboration with NASA rotary wing technology science and technology development”. Mr. Harris received the 2013 American Helicopter Society John J. Schneider Historical Achievement Award. This award recognized Mr. Harris for the documentation and preservation of our rotorcraft heritage and history in his sole-authored NASA SP-2011-215959 volumes entitled Introduction to Autogyros, Helicopters, and Other VTOL Aircraft Volume I: Overview and Autogyros and Volume II: Helicopters. In 2015, Mr. Harris was recognized with the Dr. Alexander Klemin Award from the American Helicopter Society. This award is the highest honor the AHS bestows on an individual for notable achievement in advancing the field of vertical flight aeronautics.

Harris graduated from Rensselaer Polytechnic Institute in 1956 with a Bachelor of Aeronautical Engineering degree. He was hired by Piasecki Helicopters, which was renamed Vertol Aircraft Corporation by the time he arrived for work in 1956, and Boeing Vertol Company after 1960. For 13 years, he worked as a helicopter performance analyst, aeroelastic loads engineer, advanced rotor airfoil developer and rotor blade designer specializing in fiberglass composite materials. In 1969, he became manager of the Boeing V/STOL Wind Tunnel Complex, and, in 1974, Director of Research and Development. He was also the program manager for the development of Boeing Bearingless Main Rotor (BMR).

Harris joined Bell Helicopter Textron in 1977 as Chief of Aerodynamics Technology, and then Manager of Preliminary Design. From 1980–1986, Harris was Director of Engineering for the Army Helicopter Improvement Program (AHIP), responsible for development of the OH-58D scout helicopter. As chief engineer, he directed the overall technical approach and engineering business. He was proud that the aircraft and the program are considered one of the best examples of Army procurement — it was completed on schedule, within budget and met specifications. From 1988–1992, Harris was Vice President of the LHX SuperTeam Engineering, leading the engineering groups from Bell Helicopter Textron, McDonnell Douglas Helicopter Company and McDonnell Aircraft Company in the competition to develop a light helicopter for the US Army (which ended with the Boeing-Sikorsky RAH-66 Comanche).

Harris retired from industry in 1992, and then for 30 years was active as a consultant to both large and small aerospace companies. In particular, he worked with NASA and US Army at Ames Research Center on numerous projects. He returned to basic questions of helicopter behavior, some from the earliest years of his career, approaching each problem from the perspective of a design engineer. A student of history, he often leveraged data published in old, overlooked reports to support his analyses of modern configurations. He became known for his detailed, multi-tab spreadsheets full of data plots and regression analyses; he generously shared all of his work. He explored blade motion (lateral flapping) at low advance ratio, blade flap bending and loads calculation, optimum rotor performance, profile power evaluation and high advance-ratio rotor performance. He conducted re-examinations of the McDonnell XV-1 Convertiplane, high-speed propeller tests, tandem helicopter performance, tiltwings and autogyros. He did fundamental work on operational safety of civilian helicopters, which was the subject of his Nikolsky Lecture (see below), and the cost of helicopters and economics of rotorcraft operation. Harris would often spend a week or two at a time at Ames Research Center, mentoring NASA and Army engineers, helping to craft strategic decisions, and imparting wisdom to NASA Aeromechanics Branch interns; during Harris’s final such visit to Ames in July 2022, he did each of these things.

Harris served as Technical Chair of the Society’s 30th Annual National Forum in 1974, and the 1976–1977 Technical Director of VFS (then known as the “American Helicopter Society”). He was elected a VFS Honorary Fellow in 1980 and received the Society’s Grover E. Bell Award in 1986 for development of the OH-58D. In 2006, he gave the 26th Alexander A. Nikolsky Honorary Lectureship, “No Accidents — That’s the Objective.” He also received the Society’s 2015 Dr. Alexander Klemin Award, “honored as an eminent aeronautical engineer, educator and author, with a half-century of contributions to vertical flight;” and the 2013 John J. Schneider Historical Achievement Award for documenting rotorcraft heritage and history in his three-volume book, Introduction to Autogyros, Helicopters, and Other V/STOL Aircraft. He also received the NASA Public Service Medal “for technical leadership, research, and collaboration with NASA rotary wing-technology science and technology development.”

Harris, assisted by his son Glenn, attended VFS Forum 78 in Fort Worth, Texas. Harris, ever eager to contribute, took advantage of multiple opportunities to address the speakers and audience with praise, criticism and often a bit of both.