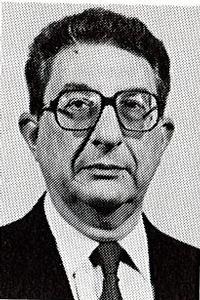 Mr. Bruno Lovera was born in Turin in 1930, and after completing Dr. Ing. At Milan Polytechnic in 1955, he served in the Italian Air Force as a maintenance officer.  He joined Piaggio in 1957 and Agusta in 1959.  After several cooperative programs with Bell, Boeing, and Sikorsky, he was responsible from 1969 to 1977 for developing the Model A109 helicopter.  He rose to Vice President of Research and Development in 1977 to lead the A129 Mangusta program.  In 1984, he became Vice President and General Manager of the Helicopter Division of the Agusta Group and led Agusta’s part of the EH 101 program.  In 1989 he became Corporate Vice President of Engineering and Programs.  He chaired European Rotorcraft Forums XIV and XIX in Italy and was honored as an AHS Fellow in 1991.  Bruno Lovera retired from Agusta at the end of 1993 as Corporate Vice President of Engineering.  Mr. Bruno Lovera was a recipient of the 1995 Alexander A. Nikolsky Honorary Lectureship for his lecture titled “Agusta — 40 Years in the Helicopter Industry.”