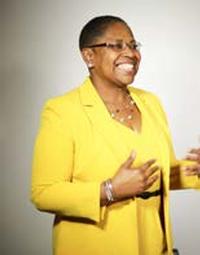 At Redstone Arsenal near Huntsville, Alabama, Dr. Juanita Harris manages a skilled workforce that plans and executes research and engineering programs and demonstrations for Aviation and Missile Research, Development and Engineering Center customers. “I see AMRDEC as a critical element in meeting the Army’s modernization priorities,” she said. “Our technologies, innovations and engineering services across the engineering life cycle are well-known across our Army and the other services.”

The Alabama AMRDEC and its directorates at Fort Eustis and Hampton, Virginia, as well as Moffett Field, California, do innovative work on sensors and electronics, propulsion, aerostructures, modeling and simulation, life cycle software development, and technical testing. The organization also has aviation sustainment and engineering personnel located in Corpus Christi, Texas, and serving as liaison engineers with Army aviation units around the world. The workforce totals about 10,000 military, civilian professional, scientific, and support personnel. Harris observed, “AMRDEC’s wide range of engineers includes all of the engineering ‘illities.’ We are also uniquely situated to hire contractors across a wide array of specialties. This flexibility allows us to increase or decrease our manning based on mission requirements and the needs of the Army. We typically are one-third government employees, two-thirds contractors.”

Harris added, “AMRDEC periodically has openings in a variety of technical and support fields, including engineering — aerospace, chemical, computer, electrical, environmental, industrial, materials, mechanical — and science — chemistry and physics. We also have the ability to direct-hire for specific specialties, and we attend job fairs at colleges and universities across the United States, particularly those with an engineering focus.”

Harris grew up in East St. Louis, Illinois, across the Mississippi from St. Louis, Missouri. She recalled, “In the home and community where I was raised, engineering was not a recognized career path for a female. At East St. Louis Senior High School, my counselor realized my strengths in the math and science areas and steered me toward looking at engineering disciplines as a career.” Harris applied to the University of Illinois while still a high school junior and considered a major in electrical or computer engineering. “At the time, the University of Illinois was the number one school in the country for computer engineering, and the only school offering a stand-alone degree in the subject.”

Harris graduated with a Bachelor of Science in computer engineering from U of I in 1985 and quickly found work with McDonnell Douglas (now Boeing) in St. Louis where she had previously interned as a student co-op. “I was hired to do computer programming, but I started working part-time on my master’s degree in computer resources and information systems management at Webster University while working full-time on computer systems for fighter jets at McDonnell Douglas. I was testing the F-18 Operational Flight Program for the Navy, and I started writing software for the Navy A-12 stealth bomber.”

In April 1991, Harris joined systems integration and information technology provider Veridian Engineering (now General Dynamics Advanced Information Systems) to work on cutting-edge Army helicopter technology at Huntsville. “I came on board as a software Independent Verification and Validation (IV&V) engineer. Veridian had the prime contract in support of the software IV&V effort for [the Boeing-Sikorsky RAH- 66] Comanche. At that time, I was supporting software for the embedded weapon systems along with the mission computer software. I later became the manager for the team. I furthered my support efforts by expanding our contract vehicle to accommodate hardware integration efforts. Prior to the Comanche program being cancelled, I was emplaced for four years as the systems integration lead supporting the Comanche chief engineer.”

The RAH-66 Comanche was canceled in February 2004 and with it a highly integrated avionics architecture built around two shoebox-sized supercomputers and millions of lines of software code. Harris noted, “The biggest challenge for the Comanche effort was the extensive integration required to support this fully-redundant next-generation platform. What set this system apart was the embedded capability to be reconfigured during operations.” She added, “A centralized computing architecture was critical to the program success but also yielded many integration challenges as the centralized processing required the integration of numerous vendor components and software capabilities.”

The lessons of Comanche have not been lost. “A centralized architecture is still the basis for open system architecture concepts,” said Harris. “Model-based systems engineering, open architecture standards for software development, and interoperable interface standards have increased the odds of success for future system developments. The activities derived from the Future Airborne Capabilities Environment [FACE] engagements are working to drive open architecture standards and requirements that support future plug-and-play capabilities. The FACE approach should lend itself to easier regression testing and ready introduction of new components providing improved system capabilities.”

After the Comanche cancellation and a short assignment in the Cruise Missile Defense System (previously Short Range Air Defense) project office, Harris joined the AMRDEC Sensor Development and Integration Directorate and PM Unmanned Aircraft Systems (UAS) as the systems engineering and integration lead for the Gray Eagle precursor. “I worked an initiative to look at new technology solutions for the UAS product baselines.”

Harris received her doctorate in organizational leadership from the University of Phoenix in 2011, and in 2012 became deputy director for the AMRDEC Aviation Development Directorate (ADD). From 2015 to 2017, she served as director of the AMRDEC Weapons Development and Integration Directorate, which provides expertise in all aspects of weapon system design, development, improvement, and integration for the Army. Harris was named AMRDEC director in November 2017.

AMRDEC now leads the Joint Multi-Role Technology Demonstration (JMR-TD). Harris explained, “The JMR-TD is an Army Science & Technology program designed to develop, expand, and demonstrate new capabilities in vertical lift technology. It is a precursor to the Department of Defense Future Vertical Lift program.” In December 2017, the Army participated in the Bell V-280 Valor JMR-TD first flight event with support from the Aviation Engineering Directorate on site in the telemetry room. Army experimental test pilots and flight test engineers from the Aviation Applied Technology Directorate were on site preparing to support follow-on tests.

Harris noted, “Advanced vertical lift capabilities will provide the future joint force ground commander with flexibility and asymmetric opportunities required in the future Multi-Domain Battle. The JMR-TD demonstrates those transformational vertical lift capabilities to prepare for Future Vertical Lift programs.” The career computer engineer added, “FVL development will outpace future threat capabilities and quickly deliver future innovations to the Warfighter through an open architecture and a path to autonomy that enables flexible integration of future advanced technology and capabilities.” AMRDEC also plays a significant, continuing role in DVE-M, alongside US Army PEOs and NATO partners. “The goal is to convert DVE into a combat multiplier by creating an advanced capability,” said Harris. “This will enable commanders to conduct deliberate operations in DVE with confidence that their crews will be safe and their missions successful.”

AMRDEC is working on three key technology components for a comprehensive DVE-M solution: flight controls, cueing and sensing. In late 2017, AMRDEC participated in NATO DVE flight trials in Germany and Switzerland, with ADD as the lead agency. The effort included AMRDEC’s Aviation Applied Technology Directorate and Aeroflightdynamics Directorate; the Army Research Laboratory; the US Army Aeromedical Research Lab; and the US Army Communications-Electronics Research, Development and Engineering Center.

Harris observed that AMRDEC plays a significant role in one of the Army’s highest priorities — modernization. “Modernization strategy has one focus: to make soldiers and units more lethal to win our nation’s wars and come home safely. AMRDEC supports three of the six modernization priorities including long range precision fires, Future Vertical Lift platforms, and air- and missile-defense capabilities. As we move forward, we will work well with our partners and customers to make sure the Warfighters receive the capabilities they need.”

Central to those capabilities is vertical lift. Harris concluded, “I have a huge respect for the American Helicopter Society in that this organization encourages and drives innovations in the vertical lift rotary system arena. The society is known strategically for advancing and broadening the knowledge base for topics such as engine performance, architecture approaches, mission computing, and performance analysis through their use of submitted and presented technical papers. The Forums sponsored by AHS always provides a wealth of technology knowledge to the rotorcraft community.”