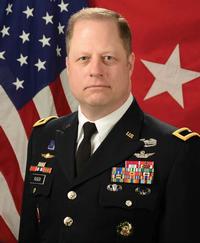 At Redstone Arsenal, Alabama, Brig. Gen. Walter (Wally) Rugen is building the Cross- Functional Team (CFT) he needs to accelerate Future Vertical Lift (FVL) modernization. Rugen explained: “We have built a team within the CFT made up of people with skillsets needed for an ACAT 1D [the highest-dollar value] program.” FVL still aims for a family of survivable, interoperable rotorcraft that provides greater reach, lethality and protection. The 28 people filling out the team will include requirements writers from Fort Rucker, Alabama, researchers from around the Army to align and assess science and technology (S&T) efforts, and acquisition experts from the Program Executive Office for Aviation in Huntsville, Alabama. “We also have contract experts who are critical for writing requirements and putting them under contract quickly. Those are two major priorities to execute our objectives as efficiently as possible.” Gen. Rugen added, “We also have engineers and science and technology experts working with us as well to ensure we maintain the highest possible standards while using cutting-edge techniques and technology throughout the process.”

The CFT has so far formulated requirements documents focused on a Future Attack Reconnaissance Aircraft (FARA) and a new unmanned aircraft system (UAS). Two major contract actions for FARA and the UAS are ready for release to industry. The FARA draft solicitation was written in less than six months, rather than the typical two-and-a-half to three years. FVL ranks third among six modernization priorities overseen by the new Army Futures Command, and CFT experts fast-track their analyses and requirements documents to select Army leadership. “We are grateful for the support of Army and Congressional leadership. Our team of professionals has benefitted greatly from the informed and rapid decision-making that they have provided,” noted Rugen. “What was once roughly 12 layers of bureaucracy; we’ve reduced to four. What we’re seeing are the benefits of decision-makers getting the information they need to make decisions on modernization rapidly.”

Aviator and Night Stalker
Walter Rugen grew up in Onalaska, Wisconsin, drawn to aviation technology. His father, Herbert, trained to become a Navy pilot but with the end of World War II found a career with the Civil Aeronautics Authority — today’s Federal Aviation Administration (FAA). “He put in a lot of the [aviation navigation aids] from Paducah, Kentucky, all the way to North Dakota,” observed Walter Rugen. “He settled in Lacrosse, Wisconsin, and ran the FAA regional maintenance team. I ended up majoring in aerospace engineering at West Point, and that was in large part due to his influence — he was a real technical kind of guy.”
The senior Rugen also provided a practical reason for his son to attend a service academy. “I have six sisters, and five of them got married in nine months,” recalled Rugen. “My dad looked at me and said, ‘Hey, there’s nothing in the tank — figure it out as far as funding for school.’” Two Rugen sisters married Army officers who encouraged him to apply to the US Military Academy in West Point, New York, where he chose the aerospace engineering study track. “I was settled on that going in, but I didn’t know if I wanted to be an aviator. I bounced between infantry and aviation throughout the years.”

The new US Army officer and engineer nevertheless completed flight school at Fort Rucker, Alabama, and joined Charlie Company of the 1/501 Aviation Battalion, flying UH-60 Black Hawks from Camp Page, Korea. “I graduated in August of 1990. That was when Saddam invaded Kuwait, and I figured I’d missed The Big One while over in Korea.” However, flying with the 501st Tomahawks provided accelerated experience. “We were a pretty young cadre,” recalled Rugen. “I became a pilot-in-command in less than six months. We certainly scared ourselves a couple of times, and that motivated me even more to study and learn my craft, especially the mission planning and safety aspects.”

Intensive air assault and night vision goggle flying in Korea also prepared Rugen to apply to the Army’s 160th Special Operations Aviation Regiment (Airborne), otherwise known as the Night Stalkers. “My battalion commander, Colonel John Binkley, encouraged me to assess for the Special Operations community as a young lieutenant. He was the one who was really formative because he knew he had a lot of young pilots in his battalion. He was a great trainer, a great motivator.”

As a captain, Rugen returned to Fort Rucker to complete the advanced course, but his first application to the 160th SOAR(A) was rejected. “They told me I was a little too young, and come back when I got seasoned at the 101st.” Three-and-a-half years of flying Black Hawks with the 101st Airborne Division (Air Assault) at Fort Campbell, Kentucky, then opened the door to intensive training in the 160th. “The first thing was a graduate degree in mission planning and navigation — basic skills with a checkride every night. It was a new mission every night, so I thought that was tremendous.” The new Night Stalker flew in varied and difficult environments and was introduced to the sophisticated MH- 60K Special Operations Aircraft. Rugen explained, “That class was part of MH-60K Block Four fielding, so it was academically intensive. The Kilo was pretty revolutionary for Army Aviation at that time — the mid-1990s. When you look at the night vision capabilities, aerial refueling and the TF/TA [terrain following/terrain avoidance] radar, all the technology was eye-opening.” The MH-60K was declared operationally ready in 1995. “It was exciting to study the systems and capabilities of the new aircraft and help solve the problems with the -K. It allowed me to build my night vision goggle experience and hone my skills as an aviator. It was fun; I enjoyed every day of it.”

Lessons Learned
With the Delta Company of the 160th based at Roosevelt Roads, Puerto Rico, Rugen flew the MH-60L Black Hawk over Central and South America. “It had a digitized communications/navigation package,” explained Rugen. “The digital cockpit wasn’t quite as advanced as that of the -K, but it had a FLIR [forward looking infrared], and it had a refueling probe.” Rugen was flying in South America when terror struck home on Sept. 11, 2001.

In 2003 he became the operations officer for 3rd Battalion 160th at Hunter Army Airfield, Georgia, and deployed to Afghanistan in a mixed battalion with Special Operations Black Hawks and Chinooks. “The environment in Afghanistan presented power limitations and a degraded visual environment [DVE] that many aviators had not previously encountered. They [performance and DVE hazards] had already manifested themselves throughout the Army, especially in the Chinooks. The 160th was no different.”

Technology answered mission demands. Rugen noted, “Our sensors and engines improved. We were also at the advent of full-motion video to give the ground force situational awareness of very dynamic targets.” Army Aviation in Afghanistan and Iraq also benefitted from better mission planning. “When you talk about our TOCs [tactical operations centers], our pilots, our maintainers, our refuelers, our mission specialists, we planned some very dynamic targets with very tight timelines because we had those tools across the force and everyone was trained on them. It isn’t always the helicopter.”

From 2009 to 2011, Rugen served on the Army Staff in the aviation directorate at the Pentagon. “I was responsible for the Black Hawk, the Chinook and the mission systems portfolio. The great thing I learned there was the scale of the Army, how the Pentagon runs, how the Army runs and how to insert yourself at the right time for resourcing. I remember telling a friend the Army was short 300 Black Hawks. He thought I’d added a zero. That just showed the scale of the Army, how big we are, and how many people are relying on us, certainly from SOCOM [US Special Operations Command], other services, and our allies through Foreign Military Sales.”
Big Army decisions meanwhile played in the earliest Joint Multi-Role/FVL deliberations. “OSD [Office of the Secretary of Defense] and Congress did a very large helicopter survivability study at that time. We had lost people in degraded visual environments, and what we saw called for a lot of sensor work, a lot of power work in our S&T. With regards to power problems, the ITEP [Improved Turbine Engine Program] was an S&T effort at that time called the AATE [Advanced Affordable Turbine Engine]. We’re seeing the fruits of that now. “

The Chinook was a really solid program that proved its worth. We weren’t at the right inflection point for the Black Hawk to do what we wanted to do there. At the time, we had resource constraints, so we did not pursue the Mike Upgrade [UH-60MU] with full-authority flight controls, a composite tail, and other upgrades. We decided to do that in the next round. We just had too many non-Upgrade aircraft in the force already, and the force needed them. We decided to jump to the FVL.”

The FVL Cross-Functional Team
the FVL CFT now has four distinct lines of effort. Gen. Rugen explained, “We have the MOSA effort — the modern open system architecture that provides a common operating system across all our equipment. It’s a government-defined standard that’s putting us at the speed of technology. We must have the ability to rapidly deploy technology upgrades. It’s also going to prevent vendor-lock with a government-defined standard and structure. There will be a lot more plug-and-play to foster competition. As we upgrade a sensor or mission equipment package, we don’t necessarily have to go back to the same vendor.”

The CFT in June issued an industry request for information on an Army FARA aligned with FVL Capability Set 1. “We want to increase lethality and protection,” said Rugen. “We’ve seen the re-emergence of peer-competitors who give us cause for concern, and we want to make sure we maintain our vertical lift dominance. When you look at recent events in the Crimea, in Debal’tseve in the Ukraine, those conflicts are informing us about how we’re going to build our next-generation systems.”

FVL Capability Set 3 still describes a Future Long Range Assault Aircraft (FLRAA). “We’re watching that AoA,” noted Rugen. “When we penetrate an integrated air defense system [IADS] with our UAS and FARA aircraft, we want to be able to exploit that penetration in a rapid manner with the Future Long Range Assault Aircraft. The speed, range and endurance that we’re getting out of both airframes are really what we’re looking for.” Reach is the Army term for speed, range and endurance.

The fourth line of FVL effort now underway focuses on UAS and air-launched effects (where the UAS is launched from a rotorcraft in tactical flight and controlled from the cockpit or crew station). “We are working diligently to bring our UAS formations to next-generation capabilities,” said Rugen. “Those are going to use purpose-built air vehicles that help with our lethal and non-lethal attacks. That’s where you’ll see the ecosystem in our four lines of effort come into play. We want that integration to be seamless.”