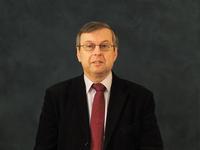 As an instructor and researcher at the University of Glasgow, Scotland, George Barakos teaches undergraduate and graduate courses in rotorcraft, fluid mechanics and computational fluid dynamics (CFD) while he investigates rotor design and high-performance computation. He observed, “When we teach fluid dynamics and introduction to aerospace engineering, we teach hundreds of students. I enjoy trying to bring some of my experience to the earliest years of their degrees.” The school has a distinguished aerospace history and modern research assets including the CFD lab, wind tunnels from low-speed to supersonic, computer simulation tools, flight test telemetry rooms and a new full-motion flight simulator. “Glasgow University is one of the very few that teaches rotorcraft as a special module,” said Barakos. “The students appear to like this module. They think that rotorcraft are different. They enjoy the simulations — they’re not like the tube-and-wing of  conventional passenger-carrying aircraft.”

Rotorcraft also remain a fertile area for simulation-based research. Barakos explained, “Yes, we have test data and other methods, but to a very large extent, we understand rotor flows better because of the work done with computational fluid dynamics. We’re now at the point where we can almost design rotors and make them have the specific characteristics we want.” The researcher conceded, “We don’t understand unsteady flows as well as we’d like — what is happening with wakes, turbulence, the interplay between rotor dynamics and aerodynamics. I think we’re in a better position because we consider simulation equal to theory and experimentation. What is really nice is industry recognizes that simulation is a way to design blades and bring blades to market at a much lower cost.”

Counting on Computers
Barakos was born in Iraklio (also known as Heraklion), the capital city of the Greek island of Crete. “My parents used to move around a lot. They were engineers following large construction projects taking place in Greece at the time. I remember at home we had lots of calculators and elementary computers that would calculate things. I always wanted to press all the buttons on the machines and see what they’d do. I suppose that’s how I developed an interest in mathematics.”

Good exam scores earned Barakos admission to the National Technical University of Athens. He noted, “The nice thing about Athens was the university also had a large computer. In the early ‘80s, the computers were mainframes connected by modems to your machines. Every time they would give a lecture, what I would do is write a little program for this mainframe computer to repeat the calculations they would use to teach us.”

Local software companies provided more computer work. “I programmed computer games [and] financial applications, and this helped me alleviate the cost of my studies throughout,” explained Barakos. “I kept looking at simulation, how to replicate dynamic flows, even simulate instruments and machinery using computer code.” The young engineer graduated with a thesis on numerical simulation of turbulent buoyant flows, but with few aerospace jobs in Greece, he looked for opportunities abroad. “The good thing about Athens was the university used to host a lot of international academics. One of the visiting professors talked about code to simulate fluid flow with finite element methods. I was so fascinated by that that I applied to his university in Canada.”

Barakos earned his master’s degree in chemical engineering from the University of Ottawa where he developed finite element methods for non-Newtonian flows. “I even ended up using the computer at [University of California] Davis in the United States because my codes grew faster than the speed of the computers at the University of Ottawa. My supervisor arranged for me to use high-performance computers in the United States, which is how I started to like parallel computing.”

Conscript service in the Greek army gave the young engineer time to consider careers. “Until that point, I was looking at fluid flows, liquid flows, gaseous flows. I wasn’t really thinking about helicopters or aeronautical engineering.” The University of Manchester in the UK provided direction. Barakos explained, “There was a PhD course to study flows around helicopters, in particular oscillating airfoils. Because of the cyclic, there’s always a constant change in the flow conditions around the rotor. I decided this was a worthy PhD study — to develop a computer method to simulate an airfoil that oscillates. The problem was enough to keep me studying rotor aerodynamics for life.”

Rotor Simulation
Though Westland Helicopters supported his PhD project, Barakos found no job with the helicopter maker. “They said, ‘CFD is nice for universities, but we don’t really use these things and we don’t really need it.’ We’re talking 1998-1999.” Barakos nevertheless found post-doctoral work on a European aeroelasticity project considering flapping wings and unsteady aerodynamics at Queen Mary College Technology Center in London. He also continued working on turbomachinery flows, high-performance computing and unstructured grid methods at Rolls-Royce. “All I had to do was keep developing CFD methods and apply them to interesting machinery flows. It was the early days of the vertical takeoff JSF [Joint Strike Fighter], and Rolls-Royce had to do a lot of computations for the lift fan. I kept in touch with vertical takeoff aircraft.”

A conference outside London provided a chance meeting with Prof. Bryan Richards from the University of Glasgow. “He was a true gentleman,” recalled Barakos. “He wanted to help young people. He called me in 2001 and said, ‘We’re looking at CFD for unsteady flows. Why don’t you come up to Glasgow and apply to become a lecturer?’” A grant from the Royal Academy of Engineering subsequently paid the university to second Barakos to the UK aerospace industry. Teaching morphed into a year-long tour at Westland Helicopters in Yeovil. “By far, the most influential person I met there was Alan Brocklehurst,” said Barakos. “He was an experimenter who used the wind tunnel at Yeovil to measure flows around BERP [British Experimental Rotor Program] tips. If it weren’t for him, I don’t think there would be any computational fluid dynamics at what is now Leonardo Helicopters. Although he was an experimentalist, he understood that with advanced methods we should be able to resolve some of the complex flows around the tips.”

Barakos continued, “It was this stay at Yeovil that convinced me that rotorcraft are what you need to study. The fixed-wing and machinery industries were far ahead in using advanced simulation. The rotorcraft industry was more conservative, and rightly so because when you design the wing of a passenger aircraft, you design for steady flow. The thing doesn’t rotate. It doesn’t flap up and down and do all the things that rotors do. Now, the rotorcraft industry is de-risking designs, and engineers simulate what they used to do in the wind tunnel.

Barakos offered, “At the moment, there is no simulation used at the certification phase. That may change in the future. We can today, with what we have available in simulation and optimization, take the Lynx main rotor blade and make it a little bit better — engineer the twist, the chord, the tip shape, etc. What we don’t have is a method that could start with a square blade and give us the BERP tip or the [Airbus Helicopters] Blue Edge tip. These designs came out of inspiration rather than optimization. It is possible though that something like the BERP tip will come out of computer optimization.”

Barakos continued, “The second thing is speed. The thing about computer simulations is they take time to run. I spend time using new computer technologies — neural computers, graphics processors, etc. — to really design and optimize blades faster. It is very important to advance both the design and also the speed of the computation. Nowadays, engineers are under pressure to deliver new designs quickly, accurate designs at low cost.”

Barakos noted simulation also plays a role in air safety. “How can we educate researchers to think about safety as part of the design? That’s the reason we created NITROS [the Network for Innovative TRaining On Rotorcraft Safety]. NITROS is an interesting European project that is trying to bring a number of research centers together, each one looking at an aspect of rotorcraft, but we remain focused on safety. A lot of accidents happen due to wake interactions close to the ground — things like brownout. We expect to deliver exceptionally well-trained students who know about the safety aspects of rotorcraft.”

Glasgow University continues to expand rotorcraft research. According to Barakos, “We’re doing this on the back of what we call the Personal Flying Machine. For me, the next step in rotorcraft and the biggest challenge we have on the horizon is that the time has come to change the configuration of the conventional helicopter. There’s no reason vertical-flying machines have to have main and tail rotors. These things are changing because we can now, with electric motors, small engines, and a lot of processing power on-board, make the helicopter personal.

“This big step forward is really to democratize personal flight through rotorcraft. I believe that the next generation that comes after me — my son for example — will commute to work on a Personal Flying Machine, and this machine will be a rotorcraft. I cannot say if it will have ducted fans or how many rotors it should have, but one thing is sure, that it will be a rotorcraft because of the superior efficiency we have and the low-speed. I also believe these special flying machines will shake up the current industry. The Ford Model T of flying machines is not there yet. What we’re looking for is cheap, easy to manufacture, and safe. These could come from Leonardo, Airbus, or Sikorsky, but a clean-sheet design may come from a completely new company.”

Barakos acknowledged that, despite the rotorcraft focus at his school, “We don’t have at Glasgow University all the resources we really need to support all the UK rotorcraft industry and operators. We’re a small department compared to some of Europe and the United States. To counter this, we recently established, with colleagues from Leonardo, the UK Vertical Lift Network. What we’ve tried to do in the UK is to join what we have at Glasgow with what we have from other universities — Manchester, Leicester, Southampton, Cranfield, Bristol, Bath, etc.”

Barakos also values AHS International as a source of shared research. “I joined AHS as a student because I wanted to go to the AHS conference,” he said. “The reason I kept with AHS is the Journal and the proceedings. For me as an academic, I honestly believe AHS is a repository of knowledge. I also think it is important to see papers written by industry. AHS does a wonderful job of bringing these people together and archiving their papers so we can always use them.”