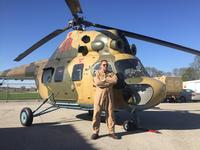 With student researchers, simulators and an instrumented fleet of five manned and three unmanned aircraft, one High Mobility Multipurpose Wheeled Vehicle and a Lexus sedan, professor Tom Schnell at the University of Iowa (UI)Operator Performance Laboratory (OPL) looks to enhance pilot safety, efficiency and interoperability. “Mach” Schnell flew the OPL’s Mil Mi-2 Hoplite research helicopter at dusty Yuma Proving Ground, Arizona, last September to evaluate the Airbus SFERION situational awareness system in degraded visual environments (DVE). Another recent OPL investigation showed how a properly designed synthetic vision system (SVS) can expedite flight upset recoveries. Other government- and industry-sponsored projects look at flight deck and sensor integration, intelligent avionics for unmanned aircraft autonomy and improved interfaces for UAV and automotive operators. Schnell observed, “The difference between a teaching-only school and a research school like the University of Iowa is that we can flow expertise from research results directly into the classroom, and our students can get first-hand exposure to research techniques.” That direct experience, Schnell added, was far more valuable than reading about someone else’s research. “The epiphany you get when data you collected condenses into a picture is a unique experience.”

Data collected with the OPL Mi-2 showed that lidar-based [Light Imaging, Detection and Ranging] 3-D conformal symbology on helmet and panel displays allowed successful brownout operations even in a helicopter without stability augmentation. The lab director subsequently flew one of two helicopters in NATO DVE-Mitigation flight trials this February. “The OPL is a full-service research organization focused on assessing human performance in crew station environments,” Schnell summarized.  “Generally, we are focusing on the aviation context with our flight operations setup, but it is not unheard of for us to do driving research. It is the same ‘Mark 1 Caveman brain’ that gets us in trouble. We think we can do two things at once, but we can’t.”

OPL researchers designed and developed their CATS (Cognitive Assessment Tool Set) model to measure human workload in real time. “Since CATS is a relational database-oriented system, you can make complex queries to get behavioral response data that may be contingent on things like trigger activities, aircraft state thresholds, external factors, etc.,” said Schnell. OPL test aircraft are instrumented along the same lines. OPL also developed an SVS suite commercialized by Dynon Avionics and currently installed on many aircraft. Schnell noted, “The value of SVS is that it is proven to save lives by preventing controlled flight into terrain.”

The Apprentice
Tom Schnell grew up near Bern, Switzerland, without special aviation or engineering influences. “My parents bought me a model aircraft kit when I was eight years old or so. My dad helped me to put it together, and the damn thing really did not fly well at all. So they connected me to the model aircraft club in my hometown and pretty much turned me over to the club. It was about the best mentoring a young kid could have gotten. Talk about hanging out with the right people — many of them were electrical engineers. To me, there was never any doubt whatsoever that I wanted to be an engineer.”

An after-school job sharpening industrial cutting tools in a metal shop gave the 12-year-old hobbyist the money to build and fly his model aircraft, and an industrial perspective. “I doubt any parents today would allow their kid to do this kind of thing. But it really taught me a lot about machinery and machining, and it paid 10 times what the paper route kids made.”

A competitively awarded electronics apprenticeship opened new possibilities for the 16-year-old electronics enthusiast. “When I graduated from that four years later, I had a certificate as an electronics technician. Then I got a job as a software developer and built compilers and protocol converters and such for a living. I also pursued my degree in electrical engineering at the University of Applied Sciences in Bern. Aviation took a back seat for nine semesters. When I graduated in 1992, I had the best GPA of the college and got a pretty nice monetary bonus applicable toward tuition for further studies.”

He recalled, “I needed an adventure. Because I had an American soul that was born into a Swiss body, I could see only one way forward: go to the US and get a master’s degree.” Schnell obtained his Master of Science at Ohio University. “That work was mostly based on quantifying and modeling human visual capabilities and limitations, especially at low light levels. I applied my software background to build computer models that could predict how far you could see things like road signs and pavement markings under automobile low-beam illumination at night. My advisor roped me into getting my PhD, and I took on a position as a full-time research engineer.” Schnell earned his fixed-wing pilot’s license in Ohio on a Piper Cherokee and later received his helicopter rating in a “squirrelly” Robinson R22. Since his first pilot’s license, he has frequently added ratings and certifications and flown more than 1,700 flight test sorties involving commercial air transport, rotorcraft and fighter-type aircraft.

Automotive vision research drew Schnell to a US Transportation Research Board conference in Washington, DC, and a chance meeting led to an offer of assistant professorship at the University of Iowa in 1998. “As faculty, you are expected to teach, do research and provide service. I decided to start a lab that I called the Operator Performance Laboratory. I did not want to be specific about what operator.”

Lab Work
The OPL today has a staff of about 15 including full-time research engineers, emeritus faculty, research pilots, a crew chief and hand-picked student researchers also paid for their work. “It is a bit like an apprenticeship,” noted chief pilot Schnell. “I am a professor in industrial engineering with a secondary appointment in the department of electrical engineering and the department of neurology. Because OPL is interdisciplinary, we primarily hire industrial, electrical and mechanical engineers. The students who work at OPL tend to go into similar industries, although not always aviation.”

The OPL director explained, “I draw talent for specific tasks, but it is fair to say that we like to attract students who can build things, be it software, electronics or hardware. The hardest-to-get ones are in software design. We do a lot of 3D conformal symbology and graphics. Thus, I am always on the lookout for experts in OpenGL, HLA/DIS [High-level Architecture and Distributed Interactive Simulation], etc. We try to cross-train individuals in various disciplines. In addition to academics and science, we train them in the craft of being around aircraft.”

Schnell added, “I am severely distressed by how far we have moved away from the real world of engineering in academia. Over the years, I have also noticed an increasing sense of overconfidence that freshmen students have in their own abilities. We often find them to fall well short of their own assessments. I think it has to do with the fact that students today experience a lot of academics online and in simulations, many times with pre-cooked, failsafe, sterile assignments. Too bad the real world is way more messy — so we are trying to teach them that nothing really is as easy as it seems.”

Aviation gives the OPL most of its real-world challenges. Schnell said, “In the military and helicopter EMS, it is controlled flight into obstacles — wires — in the DVE and landings in the DVE. The military wants to equip their helicopters with technologies that not only allow them to land a helicopter in DVE; they want to own the DVE, use it as a tactical advantage. What’s more, they want to perform complex operations in the DVE involving perfect coordination of multiple rotorcraft ingressing from different directions to an objective area, executing drops and attacks, delivering payloads, interacting with autonomous assets, ground teams and vehicle, all in the cloak of DVE; and then leave in a coordinated way in different directions. The paths in and out must be tactically changeable and unpredictable, the opposite of an instrument approach, if you will.

“To get to that point takes an extreme amount of work [like] sensor development, display development, integration, symbology design and testing. We want to provide our testbeds early in the design cycle so that designers can try out their integrated equipment early in the design when changes can still be implemented. This is what our testbeds are designed to do. It is design-risk mitigation.” Fixed-wing flight testing is done on a pair of L-29 jet trainers and the Bonanza CARP (Computerized Airborne Research Platform).

The simple, rugged Mi-2 helicopter testbed — acquired late in 2012 from a flying museum — provides a spacious, smooth-flying sensor platform. “Of course ours has a few mods,” said Schnell. It has a CAAS [Rockwell-Collins Common Avionics Architecture System] cockpit, a Hensoldt-provided Zeiss Optronics head tracker, an eight-channel digital video recorder, and hands-on-collective-and-stick buttons for the experimental payloads. “It is, as they would say in the Wheeler-Dealer [classic automotive sales] magazine, ‘fully loaded.’” The OPL plans a second Mi-2 outfitted with large-format displays in line with Future Vertical Lift cockpit concepts.

The successful DVE trials at Yuma used a BAE Styker helmet mounted display (HMD), SferiSense 500 lidar and UTC Aerospace Systems short-wave infrared sensor, but Schnell noted, “The systems that we fly in full brownout are still very expensive. You are talking $400,000 for an HMD, something like $200,000 per sensor, and you may want two or three of them, plus head trackers, software, processors, etc. This is probably a bit out of reach for some operators.” And the systems have to work in good visual environments (GVE), low light, strong sunlight, etc.

“I hope that we can pursue more affordable and lighter HMDs, but the design challenge is huge: day and night, GVE, DVE, 0.001 to 10,000 cd/m2, no latency, high resolution, color. This is not easy and does not yet exist,” Schnell says. “Another thing that bothers me is that many times the sensors and human machine interfaces are not fully integrated. It is like they live in different worlds and then meet for the first time on the helicopter. This is problematic, because we leave so much performance potential on the table, because human factors is used as a last afterthought rather than an integrated guide from start to finish.”