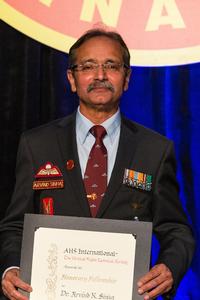 Within the CASG in Melbourne, Dr. Arvind Kumar Sinha heads engineering for the Australian military helicopter and tactical unmanned aircraft systems (UAS) programs, providing executive advice and support at the division level. “We look after the capability life-cycle from acquisition, through sustainment, to disposal, for both Army and Navy Aviation,” he explained. “We are going through various acquisitions. As far as Navy aviation goes, the last of 24 MH-60 Romeo aircraft is being accepted now. For the Army, we have 38 of our planned 47 MRH90 Taipans accepted, and we have acquired 10 CH-47Fs, with the last three in the final stages of Australian modifications. The H135 training aircraft being acquired as part of our Helicopter Aircrew Training System (HATS) is to replace the Squirrel in the Navy and the Kiowas for the Army.” CASG sustainment teams are also responsible for Black Hawk and Tiger helicopters and the Shadow 200 UAS.

Manned-unmanned teaming was a key topic at a recent Navy Aviation Symposium. Dr. Sinha noted that such network-centric operations against an unconventional adversary require a high degree of flexibility in both technology and tactics. “They both go hand-in-glove.” He added, “Target imagery acquisition, designation and hand-over technology needs to be multi-platform based — aerial, ground, surface or sub-surface. Technology also has to be in tune with the tactics employed at that point in time for optimal mission effectiveness. This strategic forethought needs to be incorporated in any tactical aerial platform during the acquisition and sustainment phases.

Warrior’s Perspective
Arvind Sinha grew up in central India in the Kirkee military station established during the British rule. “I’m from the Khastriya Rajput, the warrior-class traditional families; for us serving in the armed forces is the prime profession.” While he was in Loyola High School and Junior College in Pune, the Indian government established the first military school in Central India — Sainik School, Satara (SSS) — to prepare students for national competitive exams to join the officer cadre of the armed forces. “My father’s foresight resulted in me joining SSS. I cleared the National Defense Academy entrance exam. I took the Air Force as my first choice, but being not-cleared medically for 44th or 45th Course, I became an Army cadet when I joined the 46th Course at NDA. NDA incorporated an undergraduate degree qualification in the training program.” Few NDA graduates commissioned from the Indian Military Academy (IMA) are selected for the armed forces Engineering Branch. “As a Second Lieutenant, I was commissioned in the Electronics and Mechanical Engineering Corps (EME) that my grandfather served in during the Great War. Only nine NDA graduates out of a total of about 300 cadets went to the EME, and I was the lucky one from 55th IMA Course.”

Dr. Sinha recalled, “We obtained engineering degrees from the Military College of Electronics and Mechanical Engineering (MCEME), which I topped in the overall merit. That provides the base for further specialization to support the specific equipment that the Army operates. Based on your performance in engineering, plus your performance as an Army officer, you are selected to do post-graduate studies, a Master’s degree. That’s where you go into an engineering discipline — electrical, mechanical or electronics engineering.” (Indian EME officers today are streamed into disciplines during their engineering degree studies.)

With the Indian Army Aviation Corps not founded until a decade later, Sinha pursued a non-aerospace engineering specialty at MCEME. “When I got my first post-graduate degree, I did it in electronics engineering with further specialization in electronic warfare overseas. It so happened I was still eligible for a second Master’s, because of my age, and that’s where the aerospace comes in. The Indian Army Aviation Corps was being established, and I was amongst the first to do a Masters in Aerospace Technology from one of the five prime Indian Institutes of Technology (IIT) at Madras in Southern India — a globally renowned and acknowledged Institute. After my dream of joining the Air Force to become a fighter pilot was in vain, I entered the aerospace and aviation arena as an engineer.”

Field assignments in the Army engineering organization gave Sinha experience in varied environments and roles, including command of specialist engineering units in electronic warfare and airborne forces. “I am still an active skydiver and combatant paratrooper,” he noted. Operation Meghdoot on the Siachen Glacier in 1984 saw him as a young major posted in the eastern Karakoram mountain range of the Himalayas. The strategic glacier stretches from 11,875 ft to 18,875 ft. (3,620 m to 5,753 m) above sea level, and remains a scene of conflict with Pakistan. “I was among the first to command an engineering unit on the Glacier,” recalled Dr. Sinha. “It’s one of the highest battlefields in the world, maintained only by helicopters. At about 11,000 ft [3,353 m] at the mouth of the Glacier, the road ends leaving helicopters as the only means of transport — from air drop of supplies to evacuation of casualties.”

High density altitudes limited both the types of helicopters that could be used and their utility. “At that time, we had the Cheetah [the SA 315B Lama manufactured in India under license]. It could land at certain posts with low payload capacity — essential supplies, a passenger or casualty, or a few jerry cans of fuel.” The bigger Mi-17s of the Indian Air Force could land at the base camp but only paradrop supplies to high mountain posts. “Now, I understand, they have the HAL Advanced Light Helicopter operating up there.

Engineering Exchange
An Indian Army engineering assignment led to unexpected opportunities abroad. “During my Masters studies, I did the design work on arming the Alouettes [Chetaks in India] with machine guns. I developed a new optimum upgrade design philosophy for capability enhancement. Based on that work, I was selected for doctoral project-based research under an Australian Government Scholarship at the Royal Melbourne Institute of Technology [RMIT].” Being selected on an international competitive merit scholarship enabled then-Major Sinha to work at RMIT in collaboration with local industry. “It was the first time in the history of the Indian Army that a serving officer was nominated by a foreign government to do a PhD, and there were no clear provisions to support my move to Australia.” Special approval was granted by the Indian Ministry of Defense, enabling the active-duty officer to proceed overseas with full scholarship support. “That work came to the attention of DSTO. They subsequently contracted RMIT to continue my work to support the then-current helicopter fleet upgrade.”

Sinha earned his Doctorate in Helicopter Design with a Systems Engineering Approach at RMIT. He subsequently returned to India, rose to the army rank of lieutenant colonel, and became dean of the new Faculty of Aviation in the same military college — MCEME — where he did his original engineering studies. However in 1999, RMIT offered the highly experienced and qualified soldier-engineer the opportunity to continue his work as a senior researcher in the RMIT Sir Lawrence Wackett Centre for Aerospace Design Technology, where DSTO contracted work on the Australian Navy Seahawk. Lt Col. Sinha was granted premature retirement from the Indian Army to assume his new role. “I joined the Research Center at RMIT University and in a year became the Manager of the Aerospace Design and Commercial Office. After another year or so, I was offered to lead the Centre as its Director.” The RMIT University Wackett Aerospace Centre continues to partner with industry on fundamental and applied research through commercial contracts.

Australia has ongoing research efforts in key rotorcraft technologies. “Brownout certainly is an issue which the DSTG is working on,” noted Dr. Sinha. However, the Australian aerospace industry today rarely undertakes its own new major aerospace development programs. “We have become part of international programs,” explained Dr. Sinha. “There are subsidiaries here of international companies, Airbus, Northrop Grumman, Lockheed Martin and the like. Lockheed Martin has taken the initiative to establish one of its research hubs which will introduce front-end technologies.

“We in the Helicopter Systems Division [HSD] of CASG are working along the lines of Georgia Tech or the University of Maryland or Penn State to establish an Australian Center for Rotorcraft Technology in collaboration with the local universities, research organizations and industry. That Center, if it does happen, will be the front-end of Australian rotorcraft research, education and training. I’m in preliminary discussions for the Center to acquire a full-scale composite helicopter airframe as a prognostic ground test bed for DSTG research and for the professional training of HSD engineers.”

In addition to his government roles, Dr. Sinha was the Australian lead in the International Helicopter Safety Team (IHST) aiming to reduce civil helicopter accident rates. He observed, “Technically, rotorcraft are very safe. It’s really the operations side that needs attention, based on the Analysis of Australian Accident Investigations over a 10-year period that we did as part of IHST through Flight Safety Foundation.”

Dr. Sinha is the President of the AHS Australian Chapter and also on the AHS Board of Directors as Director of the Asia-Australia Region. “I joined AHS as a student member in 1994 when I was working on my PhD. In 1999 or 2000, I became a full member.” As Chapter President, Dr. Sinha started participation of Australian university students in AHS Student Design Competitions — resulting in the Australian team twice taking second place. He is credited with four AHS Awards including Technical Fellow and Honorary Fellow. Dr. Sinha has chaired Aircraft Design Technical Committees and Forum sessions and concluded, “AHS is a huge network and the platform for the helicopter community. Anyone working on helicopters anywhere, if you’re not an AHS active member, you’re basically out of tune with the world’s line of rotorcraft thought.”