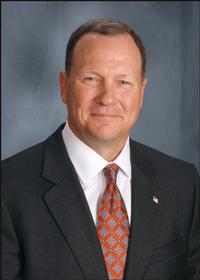 As vice president of MST’s Ship & Aviation Systems (SAS), Dan Schultz’s influence today extends to more than 3,000 employees at 21 locations. His growing-up years were similarly all over the map. “My dad was in the Navy, so I don’t get to really call anywhere home,” he recalls. “I’m a Navy brat. We spent most of our time in Virginia. I went to high school in Virginia Beach and college at Virginia Military Institute (VMI).” An early aviation encounter in Virginia made a lasting impression. “I saw a ’53 helicopter land at Little Creek Amphibious Base and said, ‘Someday, I’m going to fly those.’ I was 10 or 11 at the time. I tell kids today, to become a Naval Aviator, you have to be pretty dedicated, because there are a lot of roadblocks.

“No one in my family had gone to college before, so when I was at Little Creek, I hadn’t really thought about going to college. I took the SATs, and my guidance counselor said, ‘you ought to look at VMI.’ They gave me a partial scholarship. If VMI had not reached out to me, I probably would not have gone to college.” At Virginia Military Institute, Dan Schultz earned a degree in chemistry and got a false start on a flying career. “I was in the Air Force at VMI; I actually had a commission in the Air Force, and they were sending me to flight school. But the Air Force was going through a reduction at the end of Vietnam. I was always impressed by the Marines I ran into at VMI. I met these really incredible Marine officers and wound up being able to resign from the Air Force and join the Marines. I had to go to OCS and flight school all over again. I did real well in flight school, and had the choice to go to jets or helicopters. I chose helicopters because I’d always wanted to fly ‘53s.”

Heavy Lifting
With composite Marine Medium Lift Helicopter Squadron HMM-261, then-Lieutenant Dan Schultz made the first of many Mediterranean deployments. “I started out flying the ‘53D – the Delta – and volunteered to be on a Fleet Project Team developing the simulators. While I was working on the Team, they offered me the opportunity to work on this new airplane, the ’53 Echo, the Super Stallion.” The simulator sideline paralleled Section Leader, Division Leader and other progressive Marine Aviator qualifications. “Because I’d been working on this when they did the selection, I was the very first ‘53E pilot selected, so I went up to the factory and was trained by Frank Teft, who was Sikorsky’s chief test pilot.”

Heavy lift squadron HMH-464 stood up with CH-53Es at Marine Corps Air Station New River in 1984. Successive flying and ground assignments ultimately put Major Dan Schultz in command of a ‘53E detachment when deployed squadron HMM-461 was called upon to evacuate civilians from the U.S. embassy compound amid the Somali civil war in 1990. “My Squadron was Special Operations qualified,” recounts Dan Schultz. Rules at the time kept the ‘53E within 25 miles of the ship, but the urgent situation called for inserting two loads of Navy SEALs and Force Recon Marines into the besieged embassy at the extremes of the helicopters’ range. Dan Schultz formulated a cautious but still-demanding plan covering 900 nm from the USS Trenton to Mogadishu and back to sea with three air refuelings – two at night. “The one thing I learned dealing with MEU(SOC) [Marine Expeditionary Unit, Special Operations Capable] was ‘never become part of the problem.’ When you go to rescue somebody, you don’t want to have to be rescued yourself.” The mission commander set his launch and “must-plug” points to allow the helicopters to return to the ship or divert to the Somali desert should a refueling fail.

Without inertial navigators or GPS receivers, Dan Schultz and his fellow pilots flew time-and-distance to the first refueling point and used Night Vision Goggles to find their tankers. Near Somalia, the big helicopters dropped to 50 ft or less. They dashed inland to the embassy through groundfire from government troops and blew rebels off the compound walls with downwash to land, deploy reinforcements, and extract 61 multi-national passengers to USS Guam. For his role in Operation Eastern Exit, Dan Schultz and HMM-461 received the AHS Frederick L. Feinberg Award, “presented to the pilot(s) of a vertical flight aircraft who accomplished the most outstanding achievement in the preceding year.”

More flying, school, and ground assignments led to a Washington tour, working for the Assistant Secretary of the Navy and an important assignment at the Naval Air Systems Command at Patuxent River. “That assignment led to being selected to be the Program Manager for the V-22 Osprey. That was as tough a job as I think you could get in the Pentagon or get in acquisition.” Col. Schultz joined the tiltrotor program in the wake of two fatal Osprey crashes. “When I took over, it was right after the crash in the desert which killed a lot of Marines. “We had a Blue Ribbon Panel with some of the smartest guys on the planet. Everybody was just trying to figure out what happened. There was too much of everybody trying to do something, and it wasn’t coordinated.

“We wanted to know not just why the airplane crashed but how to fix it going forward. A lot of people wanted to get it back up in the air in six weeks. I felt like the airplane needed a basic redesign.” Analysis uncovered chafing in the fluid and electrical lines of the tiltrotor nacelles, and the familiar settling-with-power in helicopters became the feared vortex ring state in the tiltrotor. Dan Schultz formulated a plan with improvement blocks and consistent pilot assignments. “The airplane had some fundamental things wrong with it that could be easily fixed, but we had to stop ‘full speed ahead’ and fix what we knew was wrong.” He acknowledges, “I had a very good champion, Secretary of the Navy Gordon England. I give him a lot of credit for his decision, his leadership. Our Commandant, General [James] Jones, supported us going forward, and General [Frederick] McCorkle and General [Michael] Hough as well. It took us two years.”

At Pax River, Dan Schultz co-located industry and government tiltrotor teams. “The three systems engineers that we had in our program office had their Bell Boeing counterparts sitting right next to them. They worked as a team to solve the problems, not government versus contractor,” he explains. “We went on to a program that stopped the emergencies happening in the nacelles, fixed the simple things in Block A, and stopped shifting pilots. We didn’t want fixed-wing pilots to come in one day, go back to fly fixed-wing, then come back to fly the Osprey; nor did we want helicopter pilots flying the Osprey and going back to fly helicopters. The Osprey has a throttle, not a collective. We wanted pilots to become vectored-thrust pilots, not helicopter pilots, not fixed-wing pilots. I’m proud to tell you that the Osprey went through its OPEVAL with the best scores of any plane going through OPEVAL. I think the airplane is proving itself, and they’re already building Block Cs now. I think they came back.”

Transitioning the Osprey to production closed out Dan Schultz’s Marine career and launched him into private industry challenges. With Raytheon Technical Services Company, he helped shut down the last U.S. plutonium reactor, ran the neutral buoyancy tanks for NASA and also the U.S. research base at Antarctica. Dan Schultz joined Lockheed Martin Mission Systems & Sensors in 2006. He took charge of the Littoral Combat Ship program, and subsequently added the Lockheed Martin Systems Integration facility in Owego, N.Y. to his business area. The MH-60R and -60S line in Owego recently achieved Six Sigma status. “The last 10 airplanes we’ve delivered have been completely defect-free,” notes Mr. Schultz. “When we integrate our systems into those airplanes, it makes them really mission-capable. The hardest part for us was getting the manufacturing down so we could drive cost down and deliver this quality product.”

The unmanned K-MAX team led by Lockheed Martin has so far delivered some 2.4 million pounds of cargo in Operation Enduring Freedom and will continue its combat tour with the Marines into 2013. “I feel really good about that because I’ve spent a lot of time with those guys on K-MAX and their systems integration. I feel a real sense of ownership with that airplane,” says Mr. Schultz. “A lot of people believe unmanning a helicopter is easy; truthfully it is very complicated. It requires a systems engineering approach to make it a reality.”

“You don’t want to have the airplane over- or under-controlled. Your software has to be able to react to wind gusts. It has to react to a changing environment. It has to fly the airplane in such a tight, controlled space that there’s no room for error in the flight control system. You have to be able to control the airplane all the time. I want to be able to redirect it in flight, take over control of it myself and fly mundane missions completely autonomous and never think about it. The K-MAX is still optionally manned, so a pilot can just go out and fly it. Those are a lot of options that don’t existing in many unmanned platforms.”

For the autonomous cargo UAS and other applications of growing software complexity, Lockheed Martin MST is a plank-owner in the Navy’s Future Airborne Capability Environment – FACE. “Software is a disciplined approach,” explains Dan Schultz. “A lot of people claim to have Open Architecture, but when you do it, it’s a lot harder. You have to make it work from the bottom up.”

The flight simulators early in Dan Schultz’s career were programmed in Fortran and migrated to Ada. “I’m convinced as languages change, the discipline of configuration management of software is critical. What FACE does is to allow software to be truly Open so when you bring new systems on, you don’t have to spend millions of dollars to develop the same tools over and over again. For us, our idea is to make this system as interoperable as possible and as Open as possible, so we can bring new systems on without having to redesign everything.”

The MH-60R integrated in Owego was recently selected by the government of Denmark for its Maritime Helicopter Replacement Program., and continues to acquire new capabilities. Dan Schultz concludes, “I am pleased by what I am doing today. All of our efforts at MST, all of our programs, actively support the warfighter. We take that responsibility very seriously, and devote our time and expertise to making sure these critical capabilities are delivered on time, every time.”