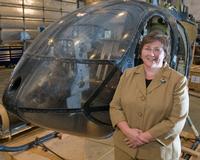 Susan Gorton heads NASA research in rotary wing aeromechanics, flight dynamics, flight control, propulsion, acoustics, structures, materials, and experimentation. As Subsonic Rotary Wing (SRW) Principal Investigator, she is responsible for about 120 people working at NASA's Langley, Glenn, and Ames Research Centers. The SRW program is consistent with the National Plan for Aeronautics Research and Development approved by the President in December 2007, and it supports NASA work on the Next Generation Air Transportation System (NextGen). Ms. Gorton says, “I think we have a very strong position within Aeronautics right now in that we’re recognized in the National Plan as a core competency.” The Vertical Motion Simulator at NASA Ames, wind tunnels at Ames and Langley, and propulsion test stands at Glenn remain US national rotorcraft assets, and the civilian aerospace agency is a valued partner in military rotorcraft development. Ms. Gorton explains, “The industry is doing the near-term research for the products coming off the line. The military has a longer viewpoint – a lot of the Army research is focused on the 10- to 15-year upgrades and new products. NASA is one of the only places doing the fundamental studies on the technology that would be applied to those vehicles probably 20 to 25 years from now.”

NASA’s rotary wing Principal Investigator grew up in Jacksonville, Illinois, but her early interest in aerospace was sparked by a family vacation stop at the Johnson Space Center in Houston. “I was fascinated by NASA and the space program at the Visitor Center there,” recalls Ms. Gorton. “That’s how I got hooked into thinking about engineering as a career.” A NASA Cooperative Education Program at the University of Illinois that promised college money for alternating semesters in school and industry required a career choice. “At that time, they were only hiring electrical engineers and aerospace engineers. Since I knew at that time I did not want to be an electrical engineer, by default, that meant I wanted to be an aerospace engineer.” Ms. Gorton adds, “Both my parents were school teachers. My dad is an avid aviation buff and model airplane enthusiast. Although I didn’t really have an interest in that, they encouraged me as I went into aerospace engineering.”

A co-op assignment at McDonnell Douglas in St. Louis filled five semesters with hydraulic design and testing, preliminary advanced design work, and a flight test engineer tour on the F-15 program. “I really got hooked on the aero side of the aero-astro equation,” says Ms. Gorton. However, the University of Illinois engineering curriculum made almost no mention of rotary-wing flight. Ms. Gorton remembers, “I got my first introduction to helicopter aerodynamics when I was offered a plant trip to Sikorsky Aircraft.” The Connecticut job interview included a tour of the CH-53 production line. “I was really amazed by the complexity of the helicopters and how large they were. Helicopters were supposed to be little things.”

Ms. Gorton received her Bachelor of Science degree in aeronautics and astronautics in 1984, but while a NASA job remained appealing at graduation, the agency was not hiring. A hopeful resume mailed to Langley Research Center nevertheless drew attention at the Army’s co-located laboratory, now part of the Aeroflightdyanmics Directorate. “That was very fortunate for me, so I packed up everything and moved down to Virginia,” explains Ms. Gorton.

At Langley, the new Army engineer joined a team exploring the loss of tail rotor effectiveness on the OH-58D Kiowa Warrior helicopter. The team built a 21% main and tail rotor model for tests in Langley’s 30 by 60 ft wind tunnel. Researchers simultaneously looked at new rotor analysis tools and experimental methods. “The Army also put me back into graduate school part-time, so I was pretty busy right there the first couple of years.” Ms. Gorton subsequently earned a Master of Science degree in aeronautics from George Washington University.

Applied research on the OH-58D was followed by generic rotor in-flow studies. Ms. Gorton explains, “Rotor inflow is one of the keys to being able to predict the rotor wake, the performance and rotor dynamics. . . .At the time that the work started – around 1986 – there were no data to verify these theories.” The Army research group used the 14-by 22-Foot Subsonic Tunnel at Langley and introduced innovative test equipment. Ms. Gorton explains, “We had a new system coming on line we thought we could use on rotorcraft called a laser velocimeter – using laser light to measure velocity. I was the youngest member of the team, and my job was to learn how to run rotor testing and run the laser – align it and use it.” She recalls, “At the time I didn’t know that it was the largest focal length system in the world. I just thought it was the system. It wasn’t ‘til later that I figured everyone else’s system was a little smaller and easier to work with.”

Basic measurements, improvements in experimental techniques, and a series of parametric tests with different rotors and industry partners filled 10 years and provided data to validate dynamic inflow theories. “They’re still using the data,” notes Ms. Gorton. “I got several requests for it last year where people are using that data to validate their computational models. That’s actually very rewarding to me in that something I did made a long-standing contribution.” NASA Ames and Langley also continue to advance rotor experimentation tools. Follow-on laser Particle Image Velocimetry started with a scanning area just 2 square inches, but according to Ms. Gorton, “We are pushing forward to expand that to a scan area of 5 by 7 ft so you can take all those measurements at one time and get a lot more data.”

Fundamental research again found practical application on the Army’s next scout helicopter. Ms. Gorton explains, “When LHX turned into Comanche, we could see right away that the empennage was very different than most of the Army helicopter inventory. . . We built a 15% scale model and we looked at things like what was the flow going to be forward of the vertical tail and into the fan face.” She adds, “That work actually won an Army R&D award.”

First flight of the YRAH-66 the following year nevertheless uncovered vibration issues, and Langley researchers were again at work. “We called it a 9-1-1 response to problems they were having in flight test,” says Ms. Gorton. “We looked for the source of the problem and for some quick fixes they could apply to the flight test.” Working with Boeing and Sikorsky, the changes were incorporated, and Ms. Gorton received the Army Civilian Service Medal for her contributions to Comanche development.

Later that same year, NASA renewed its interest in rotary wing technology to relieve air traffic congestion and appointed Ms. Gorton to oversee the Subsonic Rotary Wing program. “I felt like I was coming home,” she says. “We’re still trying to understand the complexity of the vehicle – there are so many pieces of rotorcraft where we don’t understand the underlying physics or we don’t have to ability to model accurately, or at least realistically, in a timeframe that we can use.”

The SRW program aims for a technology research portfolio applicable to large vertical takeoff transports for distances up to 600 nm. Previous studies indicate such aircraft could off-load the US air traffic system by 30%. “We’re trying to determine if the right size for that kind of vehicle is 20 passengers, 40 passengers, 70 or 90 passengers,” says Ms. Gorton. “The real challenges are some of the inherent performance issues that rotorcraft have had to face . . . . Speed is the real issue. We think we’ll have to go at least 100 kt faster than our current technology. That’ll take some radical changes to get that kind of speed.”

To fit NextGen, tilt rotors, X2 coaxial rotors, and other technologies considered by SRW researchers must be more than fast, according to Ms. Gorton. “You have to make sure you address noise. The ride quality on a commercial tilt rotor will have to be comparable to its competitors in order for people to buy tickets. It will also have to be cost-effective in cost per seat mile so the whole system will be efficient. The whole system will need to be addressed. . . . Our goal is to look ahead those 20 or 25 years and say, I’m going to need to know how to do that.”

NASA today has refined the tools to look at rotorcraft advances, according to Ms. Gorton. “Our computer analysis tools are getting better – we’re using more physics. We’re also expanding our experimental method so that we can verify or validate the new models. We’re at the point where the computer modeling needs a whole different level of experimental validation data to really pinpoint the next step to be made. . . . These two in my mind are coupled very, very closely. Within our rotary wing project now, our research teams are integrated with both experimental and computational tool development working together.”

NASA researchers are also sponsoring university work and seeking industry and international partnerships in active rotor mechanisms and actuators. Ms. Gorton explains, “The active rotor systems, I think, are really the way of the future – a way to optimize rotor efficiency with a degree of freedom that goes well beyond a passive design.” NASA, DARPA, Army, and Boeing researchers teamed on an active Smart Rotor in the National Full Scale Aerodynamics Complex (NFAC) at Ames Research Center last spring, and NASA, the Army, Sikorsky and ZFL are working on an upcoming test of Individual Blade Control. Another SRW partnership with the Army will test an active twist rotor in the Langley Transonic Dynamics Tunnel in the fall of 2009.

NASA researchers also worked with Army and Sikorsky engineers to refine fly-by-wire handling characteristics on the UH-60M Black Hawk Upgrade, and they demonstrated a pilot cuing system that guided non-test pilots through noise-friendly approach profiles. Ms. Gorton herself became a licensed helicopter pilot in the Robinson R22 and Hughes TH-55. She concedes, “I was not a particularly natural pilot. I really had to work at it. For me, the emphasis on flight controls, how to keep the aircraft trimmed, how to reduce pilot workload, those things are really evident to me as things I struggle with.”

Ms. Gorton finds satisfaction in the scope of her rotorcraft research work with both the Army and NASA. “The laser work was fundamental research. You get that sense of reward from making a lasting contribution, and knowing you’ve had the persistence and tenacity to make that long, ten-year investment in making something happen. The applied work, like the Comanche or the OH-58D, or some of the work we did with the Black Hawk, you see the results right away. You know people are counting on you to solve a particular problem. I’d have to say every job is rewarding in its own way. . . . In the research world, if you’ve identified the understanding of what the problem is, then you’ve advanced the knowledge.” Ms. Gorton adds, “There are a lot of very interesting things that are yet to be looked at.”