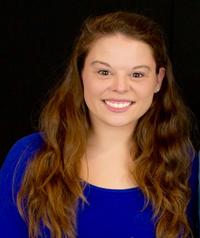 Dr. Natasha (Barbely) Schatzman, now an aerospace engineer specializing in rotorcraft aeromechanics and aeroacoustics research at NASA Ames Research Center in Moffett Fields, California, still vividly remembers her first day 10 years ago as an intern, in 2008. As her mentor Dr. William Warmbrodt led her inside the National Full-Scale Aerodynamics Complex 40- by 80-Foot Wind Tunnel, “my life changed forever and my passion for vertical flight began,” recalled Natasha. [Warmbrodt, who hosts 50 NASA aeromechanics interns annually, was in the very first class of VFF recipients in 1977, when he was a student at University of California, Los Angeles.]

As a NASA co-op intern, Natasha supported acoustics research on the Boeing Smart Material Actuated Rotor Technology (SMART) rotor, and was a co-author on a paper on active flap rotor noise reduction presented at the AHS Forum 65 in 2009. At that time, Natasha was also pursuing her undergraduate degree in aerospace engineering, with a concentration in rotorcraft aeroacoustics, at the Georgia Institute of Technology in Atlanta, Georgia.

She continued onto her masters’ degree in 2011 to refine her aeroacoustics studies, which examined in-plane noise reduction via rotor blade airfoil geometry designs, and won the VFF scholarship again at the graduate level.

“Being a member of AHS has been rewarding. While at Georgia Tech, I was an AHS member in the Atlanta Chapter and held officer positions, including President,” Natasha recalled. “I was able to give one-on-one advice to students, including numerous talks to young women to inspire them to go into STEM fields and hopefully increasing their interests in vertical flight. I have continued to be a member of AHS and have held officer positions in the San Francisco Bay Area Chapter.”

Natasha continued to work full-time at NASA Ames while finishing her PhD at Georgia Tech, which she just completed in March under the advisement of Dr. Narayanan Komerath. “Professor Komerath has been a huge help to my success; he has been able to prepare me for many of the difficult technical problems I encountered at NASA,” said Natasha. “Georgia Tech has been crucial in developing my skills and stimulating my vertical lift passion.”