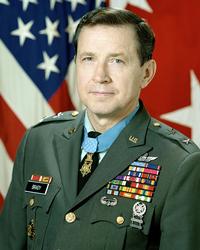 From the battlefields of the Civil War to the jungles and rice paddies of Vietnam, the United States Army has led the world in adapting transport technology to the humanitarian goal of saving the lives of the sick and wounded. Drawing on its first experiments with helicopters during the Korean War, the Army came to rely almost entirely on the helicopter for medical evacuation in Vietnam. Using Bell’s new UH-1, “Huey,” the Army’s Dust Off and MEDEVAC helicopter ambulance units tested and perfected the tactics, techniques, and procedures that helped save between 850,000 and 900,000 allied military personnel and Vietnamese lives between 1962 and 1973. The pilots of these units displayed special valor and devotion to duty that earned widespread respect and gratitude among allied soldiers in Vietnam.

Patrick Brady was one of these helicopter ambulance pilots. His Army career would span 34 years of service in stations all over the world and culminate in the rank of Major General. Still best known for his acts of valor, the self-effacing Brady saved over 5,000 wounded, flying over 2,500 combat missions as a Dust Off helicopter pilot, during two tours in Vietnam. He also developed foul weather and tactical techniques for air ambulance rescue, none of which had ever been executed in combat before. The "Encyclopedia of the Viet Nam War", among other books, named Brady the top helicopter pilot of that war.

It was during Captain Brady’s first tour (1964-1965) in Vietnam when he met the “Father of Dust Off,” Charles Kelly, the third commander of the 57th Medical Detachment. While many considered Major Kelly a “mad man,” history would validate his seemingly outrageous actions as the mark of a genuine hero, a quiet man who gave his life honoring his commitment to saving others. Brady recounts, “I knew only one way—the Kelly way. Driven by his goal to save Dust Off, his way was simple: The patient came first and then the rest.” General Brady and many others would fight to preserve the legacy of Charles Kelly, whose fundamental lessons guide modern Dust Off operations to this day.

Major Brady deployed to Vietnam, for his second tour, with the 54th Medical Detachment (1967-1968). Using the lessons learned from Kelly and taught by Brady, this 40-man unit with six Huey helicopters further refined these tactics and techniques to evacuate 21,435 patients in 8,644 missions while flying 4,832 hours—resulting in 26 Purple Hearts. Brady was awarded both the Distinguished Service Cross and the Medal of Honor during this tour. The Medal of Honor was earned for a series of rescue missions during which he went through three helicopters to save over 60 wounded men in heavy fog and instrument flying conditions.

Some pundits recognize Major General Patrick H. Brady as the most decorated living veteran, as he is the sole veteran of Vietnam alive today (2013) to hold both the Medal of Honor and the Distinguished Service Cross, our nation’s second highest award. Brady’s other awards include two Distinguished Service Medals; the Defense Superior Service Medal; the Legion of Merit; six Distinguished Flying Crosses; two Bronze Stars, one for valor; the Purple Heart; and 53 Air Medals, one for valor. General Brady, a member of both the Army Aviation (1990) and Dust Off (2001) Halls of Fame, was recently nominated for induction this October (2013) into the National Aviation Hall of Fame in Dayton, Ohio.