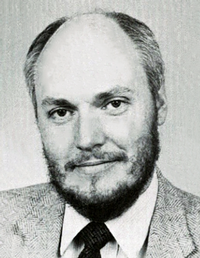 Known always as "John" to his friends and colleagues, Frederick John Perry is best remembered as the Chief Aerodynamicist responsible for the unique BERP helicopter rotor and a key member of the small team of engineers that captured the helicopter absolute world speed record in 1986, which still stands to this day. His contribution to the development of analytical techniques, his grasp of rotating wing physical behavior and the inspirational vision which led to the BERP blade has left a legacy that few can aspire to match. John arrived from his native Canada in 1969 as a young aerodynamics engineer to take the Athlone Fellow research position at the NPL where he gained his MSc and "Diploma of Imperial College". At the completion of his studies he joined Westland Helicopters in 1971 as an "aerodynamicist", in part no doubt because of the on-going development of rotating wing aerofoils at NPL and the Company's determination to achieve a step change in helicopter performance. John stayed with the aerodynamics department throughout his career at Westland Helicopters, rising to the position of department lead as the Chief Aerodynamicist in 1981 which he proudly held until his retirement in 1999. During the entire time he was instrumental in the development of rotor technologies for all of the Company's products together with supporting analytical tool development and research activities. He was recognised by the civil airworthiness authorities as a compliance verification engineer, in which role he was responsible for the independent assessment of design compliance with international airworthiness design codes. John enjoyed a wide range of collaborative activities with Companies and Government organizations across the globe and he published many peer reviewed papers on topics related to rotor aerodynamics and noise. He is the author or co-author of eight patents relating to rotor configurations.

Following retirement from Westland Helicopters he lectured at Bristol, Swansea, Southampton and Imperial College, nurturing aspiring young engineers. His expertise was a matter of international recognition and he was invited to present lectures and support industrial training in Sweden and South Korea. He was also involved in many study projects on rotor improvement for the overseas customers. Always inventive his time in retirement was punctuated with the development of concepts to further improve the helicopter rotor including novel active flow control and methods to better understand the fundamental behavior of the complex rotating wing aerodynamic environment.

His interests outside of work included aviation history, Canadian railways, and photography. His main passion was designing, building and flying his own model aircraft. Frederick John Perry died on 17 February, 2019 at the Bristol Royal Infirmary. He is survived by his only son Rupert, but pre-deceased by his wife Jill who passed away in 1976. His colleagues and friends will all miss his confident and knowledgeable contribution to all matters of debate whatever the subject matter.