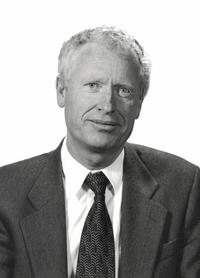 1943 to 2019
Dr. Dieter Braun passed away at age 75 on June 16, 2019. He had been a member of VFS for 40 years. Braun was born on Dec. 19, 1943, in Rhöndorf, North Rhine-Westphalia, Germany, where he spent his childhood and youth. After completing school and military service, he attended RWTH Aachen University, where he studied aeronautical and aerospace engineering. After graduation, he earned his doctoral degree of engineering at the Institute of General Mechanics at RWTH Aachen University, where Prof. Fritz Schultz-Grunow was his mentor.

In 1977, Braun moved to Munich with his family and started to work at the Department of Dynamics and Vibration in the helicopter division of Messerschmitt-Bölkow-Blohm GmbH (MBB). In the early days of his career, his work focused on the development of a vibration control technology (the ARIS anti-resonant rotor isolation system), which was patented and successfully used in the EC135 after extensive testing. In 1982, he continued his professional career at MBB as head of the Department of Aerodynamics, Flight Mechanics and Flight Control.

Braun then became Senior Manager of the General Design and Architecture Department at Eurocopter Germany (today Airbus Helicopters) in 1995. Among other projects, he worked on a progressive fly-by-light system that was developed by Eurocopter Germany and Liebherr as part of a technology program with the German Aerospace Center (DLR).

In 2008, he retired from his regular daily work at Eurocopter Germany, but continued to pass on his knowledge and experience to his younger colleagues as an advisor of the company until age 70.

During his career, Braun contributed substantially to a number of innovative technologies, earning the appreciation of local, national and international colleagues. Both his professional expertise and his character were well respected. His French colleagues referred to him as “a beautiful person” in their condolences letter.

Braun remained true to his workplace throughout his professional life, spanning 36 years, while the name of his employer changed from MBB to Eurocopter and recently to Airbus Helicopters. Beginning from childhood, he loved to puzzle over technical problems and create things his whole life. Even after his retirement, his passion and enthusiasm for engineering — and especially helicopters — was obvious to all.