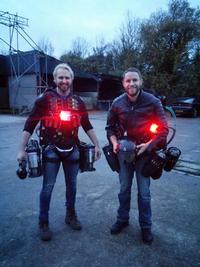 Aerospace Professor, Flying Suit Innovator Dr. Angelo Niko Grubisic, a University of Southampton Lecturer in Astronautics and Advanced Propulsion, professional wingsuit athlete, and a jetsuit pilot, was killed Aug. 21 during a wingsuit jump in Saudi Arabia. He was 38 years old.

Grubisic was born in Walsall, north of Birmingham, England, on June 24, 1981, and grew up in nearby Willenhall. He earned three aerospace engineering degrees and served as a consultant for QinetiQ. He worked extensively with the European Space Agency and NASA Jet Propulsion Laboratory in the development of advanced propulsion technologies. Grubisic joined the Astronautics group at the University of Southampton in 2013.

He was a highly experienced BASE (building, antenna, span and earth) jumper and the 2019 British Wingsuit Champion. Grubisic was working with 10 students to design the ideal wingsuit to claim several world records by jumping from 45,000 ft (12,200 m), fly for more than 20 miles (32 km) for more than 15 minutes, reaching 280 mph (450 km/h). The effort, which he dubbed the Icarus Project, was named for the hero of the Greek myth who died after flying too close to the sun.

Beginning in 2016, he worked with Richard “Iron Man” Browning, who invented Gravity Industries’ Daedalus Jet Suit, powered by a pair of turbojet engines on each arm and one on back. Grubisic was Jet Suit Pilot #002 and chief flight instructor for Gravity Industries, holding the altitude and speed record in a jet suit without wings.

Grubisic is quoted as saying, “If you’re not doing what you love, you’re the crazy one.”

In the photo, Grubisic is on the left with Richard "Iron Man" Browning on the right.