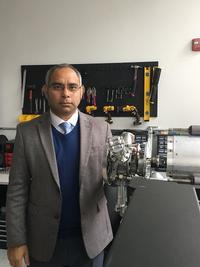 At the University of Maryland (UMD) Alfred Gessow Rotorcraft Center (AGRC) — one of the nation’s three Vertical Lift Rotorcraft Centers of Excellence — Anubhav Datta, teaches graduate classes in helicopter and tiltrotor dynamics and advises a dozen graduate students in advanced vertical lift. “Modern innovations occur at the intersection of disciplines,” he explained. “We let our students create their own multi-disciplinary areas as long as they are relevant to the advancement of rotorcraft and aligned with national priorities. We work on three major thrust areas — high-fidelity structures for computational aeromechanics, wind-tunnel testing for high-speed tiltrotors and compounds, and innovative propulsion for electric vertical takeoff and landing (eVTOL) aircraft.”

Research on eVTOL focuses on power and propulsion. “Students build their own hardware and test their own theories,” said Datta. “They explore engine-generator based hybrid-electric power, as well as advanced batteries and hydrogen fuel cells in search of long-term alternatives to lithium ion.” Professor Datta summarized, “If you asked me what are the three major barriers to eVTOL, I would say power, power and power. Give us power and energy, we can sort out everything else.”

In any given year, the AGRC has around 60 graduate students working with nine teaching faculty and 14 research faculty. About 85% of the students are US nationals. Prof. Datta noted, “We draw from a high-caliber candidate pool of diverse backgrounds — aerospace, mechanical, physics, chemical and computer science. Many are national fellows.” The Center attracts undergrads from many schools, such as Cornell, University of Texas at Austin, Michigan, Georgia Tech, Penn State, MIT, U Mass, and Notre Dame. “Maryland’s undergraduate program has also strengthened over the years. Today, we recruit some of our brightest undergraduates.” Dr. Datta’s lab also engages high school seniors from local schools, particularly those of less represented backgrounds. “We want to show what aerospace has to offer early on, how grand and cool it is, and that we want the best and the brightest, regardless of background.”

Looking Up
Anubhav Datta grew up in Kolkata (formerly called Calcutta), India, and went to South Point School. The future rotorcraft researcher was the son of an electrical engineer and a school teacher in a family without aviation ties, but he found an early interest in aircraft. “I would go to see off my father when he traveled for business. The airport had a visitor gallery at the roof. There would be a dozen flights a day at the most, and I would sit and draw the planes. I still remember vividly an Antonov An-124 take off. I was only three at the time, but it left a lasting impression. Airplanes fascinated me, I suppose like many other kids.”

The Indian Institutes of Technology (IIT) were among the few colleges to offer aeronautical engineering, and Datta earned his bachelor’s degree at the campus closest to Kolkata, IIT Kharagpur. “In my senior year, I applied to US universities for graduate school. I came to Maryland because of Inder Chopra. He sent me a letter describing the research programs in detail while offering a scholarship. I was impressed. Maryland and Cornell were the two schools who actually wrote back in detail, not just mail a typical scholarship letter. I picked Maryland for Dr. Chopra and because it had a separate aerospace department. But I had no idea what rotorcraft was.”

UMD from 1998 to 2004 provided an intense introduction to rotorcraft. Datta recalled, “Inder Chopra was my role model and greatest mentor. I was also fortunate to have Alfred Gessow, Marat Tishchenko, and VT Nagaraj as teachers. As part of my research, I would later interact with Frank Harris, Wayne Johnson, Bob Ormiston and Bill Bousman — legends in rotorcraft — as well as rising stars such as Hyeonsoo Yeo and Mark Potsdam who are now distinguished in the field.” Datta’s thesis was part of the Black Hawk Loads Prediction Workshop that solved the 30-year-old high-speed lift phase problem in aeromechanics and introduced the first successful coupling of computational structures with computational fluids.

As an assistant research scientist and lecturer at UMD, Dr. Datta was recognized in 2006 by VFS (then the American Helicopter Society, AHS) with the prestigious François-Xavier Bagnoud Award, “given to an individual Society member who is 35 years old or younger for their career-to-date outstanding contributions to vertical flight technology.”
Datta’s doctoral work earned him a job with the US Army at NASA Ames Research Center in 2007. “There, I was mentored by the master craftsman — Wayne Johnson. In fact, he was the reason I went to Ames.” The Army’s HI-ARMS (High-performance computing Institute for Advanced Rotorcraft Modeling and Simulation) program was looking to develop a multi-disciplinary software that could design lighter, faster, smoother, quieter and stealthier rotorcraft, virtually and speedily, for timely US Department of Defense (DOD) acquisition.

“My task was to repeat my thesis work,” said Datta. “But on the side, I started a brand-new effort to build a next-generation solver for structures. Wayne and I first discussed about it over lunch at the 2007 AHS Forum [Forum 63 in Virginia Beach], and later hinted the need for it in a paper on future requirements in 2008. It was to be a new kind of solver — a break from 50 years of tradition in dynamics. The dynamics world was divided: opinions ranged from impossible to unnecessary. Over the next few years, I set about designing it on paper, formulating the algorithms at the quiet reading room of what was still left of the Ames library. Roger Strawn, who led HI-ARMS, was the steadfast champion of this effort. Occasionally I would use the Stanford library, because NASA was busy dismantling its own. I found wise counsel in Prof. Charbel Farhat of Stanford — the father of the FETI [Finite Element Tearing and Interconnecting] method — and Guru Guruswamy of NASA, one of the early pioneers of fixed-wing aeroelasticity. When I was frustrated, I would walk down to Wayne’s office. That was how I began X3D.”

The HI-ARMS software became HELIOS (HELIcopter Overset Simulations) and later part of DOD’s CREATE-AV (Computational Research and Engineering Acquisition Tools and Environments – Air Vehicles). Datta explained, “The breakthroughs of the Black Hawk Loads Workshop were codified by HELIOS, and capabilities expanded manyfold. The effort gave US industry timely access to cutting-edge technology for free. It exemplified the positive role of the government.” Datta also worked with the team testing a Black Hawk rotor in the National Full-scale Aerodynamic Complex (NFAC) at Ames. The test was conducted up to an extreme advance ratio of 1.0 — the first for any production rotor. Datta recalls, “I was fortunate to work under Tom Norman, and learned all the intricacies of rotor testing from him.”

Datta also contributed to the effort on the NASA Jet Propulsion Laboratory/AeroVironment Mars Helicopter due to launch in 2020. “This would be the first attempt at controlled flight outside Earth, a major milestone in aviation if successful.” The configuration was similar to UMD’s AHS/Sikorsky winning design of 1999-2000. Datta led that design. “The real helicopter is more advanced and intricate, so the similarity is superficial.” The exotic rotors of NASA’s Mars Helicopter required detailed 3D stress/strain analysis. Only one solver was capable — X3D. “It was a fitting use of a solver built for the future.” Datta added, “only one person was an expert in building X3D models at the time — William Staruk, a Ph.D. student at AGRC, now at Aurora. But the files could not be shared, so I flew to Maryland, and he worked directly in my computer, burning late hours over many days.”

In 2011, Datta was inspired by the electric revolution in automobiles and Pascal Chretien’s electric helicopter flight (see “From Concept to Prototype in 180 Days,” Vertiflite, March/April 2012), and began exploring electric VTOL aircraft ramifications.

Datta wrote his first paper on eVTOL in 2012, which became the world’s first peer-reviewed eVTOL scientific journal article to be published [Datta, A. and Johnson, W., “Power Plant Design and Performance Analysis of a Manned All-Electric Helicopter,” AIAA Journal of Propulsion and Power, Vol. 30, (2), March 2014].

Datta noted that, “The first paper in 2012 was merely a paper study to quantify the power barrier and technology requirements. But within three years the field exploded with inventors rushing to build real aircraft.” Datta recalled, “Mark Moore from NASA, and later Uber, was the key driver. He created, almost single-handedly, the momentum for urban air mobility [UAM]. At the same time, DARPA’s LightningStrike, a program created by Ashish Bagai, galvanized the field by injecting a serious dollar investment.” For eVTOL to succeed, Datta believes inventors and engineers need to understand vertical flight as much as electrochemistry and electric power. To this end, he organizes and teaches the VFS Short Course on eVTOL Fundamentals with hand-picked NASA and industry partners. He is also the founder of the VFS Electric VTOL Technical Committee, which is chartered to steer the technical growth of this field.

Back to School
When his wife moved back to the US East Coast, Anubhav Datta rejoined his UMD alma mater. “I was an educator at heart always. It came from my mother and grandfather who were life-long devoted teachers. I found a similar dedication later in my advisor Inder Chopra. He convinced me to return to Maryland. He was the reason I did.”

The Gessow Center today provides Professor Datta both teaching opportunities and research facilities. “A central theme of my research is speed. We want to fly twice as fast in the next 10-20 years. That’s not an incremental change. The two configurations the US currently leads the world in — tiltrotors and hingeless coax — are both fundamentally geared toward speed. Several breakthroughs are needed to fulfill their true potential — from vibrations to flutter to flying qualities. All of these provide fertile ground for future researchers.”

Electric propulsion has a special appeal to UMD researchers. “The fundamental lure of electric is green, carbon-free flight. But there are other attractions, among which is the promise of a new industry.” Datta added, “Many believe it is easier to fly and insert autonomy with distributed electric propulsion. It is, for sure, at small scales. But real aircraft have to carry real payloads, which means larger size and lower disk loadings, which impact wake and structural integrity and thereafter impact everything from noise to infrastructure. There is a big gap in basic understanding in these domains. Current tool sets fine-tuned for decades will not be applicable. Batteries must be built with VTOL requirements in mind. How quiet is quiet enough will have to be determined. Ten years ago, an electric VTOL would not lift off the ground. Now, it can fly for 15 minutes. That’s enormous progress and fertile ground for innovation.”

Professor Datta joined the then-AHS as a fresh UMD graduate student and continues the tradition with his students today. “That is the first action item for students: join VFS. I joined in 1998.” He concluded, “I owe my career to VFS. If it were not for VFS, I would not have been in the field this long. You want to be where the knowledge flow is from outside into you. VFS is home of the top intellects in every aspect of vertical flight. It is also a very nurturing society, the best incubator of future talent, and home to the premier journal in vertical flight.”