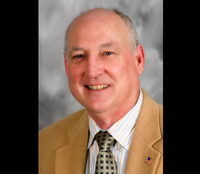 Former Columbia Helicopters President and CEO Michael Anthony Fahey died April 7, at the age of 76. Fahey worked with the heavy-lift helicopter company for 39 years and served as its president for 15 years.

Fahey was born May 17, 1943, in Oregon City, Oregon, and grew up in the Portland area, attending Lake Oswego High School. He then enrolled at Portland State University, where he graduated in 1966 with a BA (Honors) in Accounting and became a Certified Public Accountant in 1968. From 1966 to 1975, he was employed by Arthur Young & Company carrying out various auditing and client consulting services.

One of his assignments with Arthur Young was an auditing project with Columbia Helicopters, a small but growing firm with a hangar at Portland’s Swan Island Heliport. He joined Columbia in 1975 as its first director of finance, where he was responsible for its accounting systems, costing, computer operations and finance control. There, he met the company’s founder, industry pioneer Wes Lematta, and the two worked closely together for many years. Fahey was later named vice president of finance.

In his role at Columbia, Fahey was also involved in business and program development, including acquisitions and contract negotiations for both domestic and foreign operations. During his tenure at Columbia Helicopters, he played a significant role in many of the company’s many advancements, including purchasing Columbia’s first Boeing Model 234 Chinook and negotiating the purchase of two additional Model 234 Chinooks from business tycoon Donald Trump. In 2006, Fahey negotiated the purchase of both the Type Certificate and Production Certificate for the Model 234 Chinook and Vertol 107-II helicopters from Boeing.

In January 1998, Fahey assumed the duties of executive vice president, in addition to those of vice president of finance. In April 1999, he assumed the responsibilities of company president, and in January 2012, he also assumed the duties of CEO. Additionally, he served on the company’s Board of Directors. He retired from the company on Dec. 16, 2014, living in Vancouver, Washington. While well known for his financial acumen and business savvy, Mike was also gifted with great kindness and a big heart.