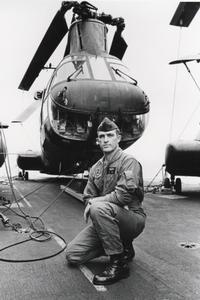 Robert Dixon Garner passed away on May 20 at home in Huntingtown, Maryland, at the age of 74. Born in Prince Frederick, Maryland, on Feb. 3, 1946, he became the first midshipman from Calvert County appointed to the US Naval Academy, graduating in 1969 and being commissioned a Second Lieutenant in the US Marine Corps. A naval aviator, he primarily flew the CH-46 Sea Knight (aka "Phrog"), but also operated many other aircraft as a flight instructor.

Following numerous deployments to the Mediterranean, Garner (call sign "Hippo") assumed command of Marine Medium Tiltrotor Squadron 264 (HMM-264) in New River, North Carolina. He transitioned to the acquisition world and became program manager of the V-22 Osprey tiltrotor, shepherding it from termination by the George H.W. Bush Administration back to life and its transition into production.

After 28 years of service, he retired from the Marines as a colonel and joined the team of FLIR Systems, returning to his native Calvert County. He later served as a substitute teacher and coached girls softball.