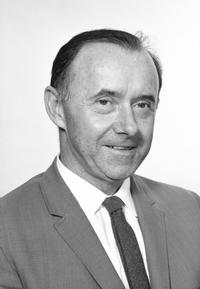 Harry T. Jensen was the vice president of technology and the vice-president of engineering at Sikorsky Aircraft. He made tremendous contributions to the fields of helicopter qualification, structural reliability, and safety.

Harry Joined Sikorsky in 1941 and served as the Vice President of Technology there. He was later promoted to the vice president of engineering at Sikorsky, where he was responsible for all long-range technology–appraising and planning the divisions technical and engineering programs and their relation to Sikorsky‘s business goals. He held several patents in aircraft design methods. He is an Honorary Fellow of AHS. One of his areas of expertise was Aeronautical Fatigue, and he presented at the International Conference on Aeronautical fatigue in 1965, and the subject of his presentation was, “The Evolution of Structural Fail Safe Rotor Concepts–Rotorcraft”.

Harry became an AHS member in 1950 and was made an Honorary Fellow of AHS. The AHS/VFS Harry T. Jensen Award was named after him and recognizes those who make an outstanding contribution to the improvement of helicopter reliability, maintainability, and/ or safety through improved design.