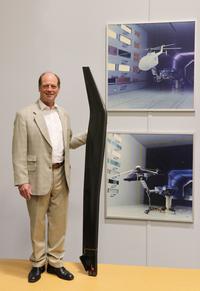 As a rotorcraft expert in the helicopter branch of the DLR Institute of Flight Systems, Berend G. van der Wall reports directly to branch heads investigating active rotor control, blade design, rotor wake modeling, physics-based modeling, numerical simulation and wind tunnel testing. He observed, “Rotor blade design can still be squeezed for higher performance, but the margins become rather small by now. Today’s goal must be the overall optimization of the entire vehicle.” He leads the DLR URBAN-Rescue research project and the multinational Smart Twisting Active Rotor (STAR) effort. The senior scientist noted, “There are a lot of interferences on helicopters — rotor-on-rotor, rotor-on-fuselage, rotoron-empennage, rotor-on-horizontal stabilizer and viceversa. Only a few of these are currently modeled in simple engineering ways.”

URBAN-Rescue envisions two concepts: a high-speed rescue helicopter with noise-reducing Blue Edge-style rotor and fixed wings, and a small doctor-transporter like an electric vertical takeoff and landing (eVTOL) urban air mobility (UAM) multicopter. The multicopter with interactions between rotors, outriggers and cabin especially requires interdisciplinary design. “That’s really tricky and challenging because the space of interactions explodes exponentially with the number of elements,” explained van der Wall. “Many journal papers focus on multicopters and their interferences and interactions, but in most cases they either use wind tunnel measurements or computational fluid dynamics [CFD] to identify these interferences with regards to performance or noise.”

URBAN-Rescue aims at a wind tunnel experiment to generate a database used to validate aeromechanical and aeroacoustic simulations. “To have a tool at hand that’s capable of real-time applications, you need an empirical or halfway-empirical physics-based model which is fast and analytic, and not a CFD design in every case.” An instrumented model of the fast rescue helicopter will be tested in Germany’s NWB low-speed wind tunnel at Braunschweig. Blade design aims at follow-on tests of a Mach-scale model rotor in the DNW German-Dutch Wind Tunnels large, low-speed facility in Marknesse, the Netherlands.

URBAN-Rescue multirotor interference tests at DLR Göttingen will also add to the database and help validate simulation tools. “I think never will we reach the state of having the ‘ultimate tool.’ Multicopter UAM vehicles or even unmanned eVTOLs will be matured from a new class of vehicles that have a variety of new problems to solve. I think the space for investigations will never end. I don’t think young engineers in aerospace will become unemployed,” van der Wall said.

Exploring Engineering
Berend van der Wall grew up in Braunschweig (historically written “Brunswick” in English), near the former border with East Germany and now home to seven DLR institutes, the flight operations group, a low-speed wind tunnel and a motion-based simulator. His parents, Gerd and Ingeborg van der Wall, fled East Germany in the 1950s and settled in Lower Saxony where the senior van der Wall became a veterinarian. “My parents never put any pressure on their children as to what we would become,” said the career rotorcraft engineer. “They said, you can become whatever you want, but become it with your heart, otherwise, you’re unhappy with it.”

van der Wall recalled, “When I was seven, I got a Märklin metal construction set which spurred my interest in mechanics, as did Lego, for a long time.” A wooden glider kit focused the engineering-minded 12-year-old on flight. “My parents had neither intention nor any clue about the consequences with that Christmas gift, but they were quite happy with the outcome. In combination with airshows at the Braunschweig airport in the 1960s-70s, my interest in aeronautics was born.” He confided, “I also had an electronic experimental kit and built my own radio, so I could have become an electrical engineer instead. One experiment killed that. When I was about 12, I rolled up the metal foil wrapper of a praline candy and poked it secretly into the wall socket. What happened thereafter was very influential in my choice of studies and thus my career.”

Technical University Braunschweig close to home offered inexpensive mechanical engineering studies with an aerospace specialization. “Also, I could turn my hobby of remotely controlled model flying into my profession,” van der Wall observed. The future aerodynamicist had no early passion for mathematics. “Only at the university I figured out that it is up to the teacher to make it interesting. You actually can play with mathematics, and it’s a really good toy for describing the physics of the problems that we encounter today.”

An undergraduate thesis brought an invitation from Prof. Dr. Hans Försching, director of the DFVLR — Deutsche Forschungs- und Versuchsanstalt für Luft- und Raumfahrt (DFVLR) or “German Test and Research Institute for Aviation and Space Flight,” as DLR was then known — Institute of Aeroelasticity in Göttingen. “It acquainted me for the first time with unsteady panel methods applied to a ring-wing.” Bernd Gmelin, then helicopter branch head of what was the DFVLR Institute of Flight Mechanics in Braunschweig, suggested follow-on studies. “That thesis was about a new unsteady analytical method that was presented at the European Rotorcraft Forum [ERF] a few years before. The model could represent unsteady airfoil aerodynamics, especially dynamic stall, in a physics-based semi-empirical engineering approach.”

van der Wall became a research scientist in the helicopter branch of the Institute of Flight Systems at DLR Braunschweig. “I got my diploma in aerospace engineering in 1986 without any class in rotary-wing theory. Prof. Günther Reichert from MBB [now Airbus Helicopters] was hired by TU Braunschweig, and I took his rotorcraft classes right after starting employment at DLR. The content included many examples from the Bo 105 helicopter, since Prof. Reichert was one of its main developers.”

The graduate engineer also attended the 45th Annual Forum of the AHS (now VFS) in Boston 1989. “I was urged to travel down the east coast and visit potential universities that were specialized in rotorcraft or centers of excellence in rotorcraft technology. My institute director, Prof. Peter Hamel, wanted me to obtain a master’s degree at one of them.” The tour included Princeton, Penn State and the University of Maryland (UMD). “The latter caught my attention as there I met Prof. Inderjit Chopra, the rotorcraft dynamicist and rotor aeroelastician, and Prof. J. Gordon Leishman, who had just joined the UMD team as an unsteady aerodynamics expert. Also, I met Prof. Alfred Gessow. That triggered my decision to go to UMD in late 1990.”
Graduate studies culminated in a thesis that extended Rufus Isaacs’ 1945 theory of oscillating flat plate airfoils in unsteady free-stream velocity to rotorcraft comprehensive codes using arbitrary motion theory. “There were no useful experiments available for proving the results despite their plausibility. Together with Klausdieter Pahlke [see “Leadership Profile, Vertiflite, Nov/Dec 2015], I successfully applied an unsteady 2D Euler CFD code to a NACA 0002 airfoil and obtained practically the same results as the analytic theory predicted. Recall that this was in 1992, when CFD was just entering the rotorcraft community.”

Rotor Research
DLR collaborated with NASA, the US Army and French ONERA researchers and the DNW to wind-tunnel test active higher harmonic blade control (HHC) for vibration and noise reduction. It subsequently partnered with ONERA on the passive ERATO (Etude d´un Rotor Aéroacoustique Technologiquement Optimisé) solution to blade vortex interaction (BVI) noise. “The results enabled Eurocopter [now Airbus Helicopters] to develop a series-production rotor, which almost 30 years later became the Blue Edge rotor blade installed on the brand-new H160 helicopter,” noted van der Wall. “Research organizations such as DLR are working on the mid-term to long-term visions, what might be applicable in five to 20 years or so. ERATO is a good example of the timeframe from an idea to a realization, almost a researcher’s complete professional life.”

In successive assignments, van der Wall oversaw the multinational higher harmonic control Aeroacoustics Rotor Test (HART) II in the DNW wind tunnel and became the DLR representative on DLR-ONERA active rotor research. Work continues on higher harmonic control/individual blade control. Smart-Twisting Active Rotor (STAR) puts “artificial muscles” in the blade rather than discrete mechanical actuators on the blade. “It is based on piezofibers which are embedded in the upper and lower surfaces of the blade,” explained van der Wall. “When you apply voltage, you have a small elongation or shrinking with high force. These actuators twist the blade, usually at an integer multiple of the revolutions of the main rotor. STAR will operate like individual blade control. The nice thing is it will not have any mechanical devices. You simply apply a voltage with direct and alternating current to generate steady and harmonic moments, respectively. Currently, we have manufactured a new four-bladed main rotor for our testbed with international participation from ONERA, NASA, the US Army, Glasgow University in the UK, JAXA in Japan, KARI and Konkuk University in Korea, and the DNW.”

Berend van der Wall earned his engineering doctorate at TU Braunschweig in 1999 and has lectured on helicopter aerodynamics and rotor dynamics at the university since 2007. He became a DLR senior scientist in 2011 and a professor at Braunschweig in 2014. “Comprehensive rotorcraft codes have matured for elastic blade modeling, unsteady aerodynamics including 3D-effects and rotor wake,” the researcher explained. “In parallel, computers have significantly improved their performance, and even the most sophisticated modeling runs at very reasonable processing times. CFD models the rotor and the entire vehicle. It is capable of resolving blade tip vortices and predicting BVI noise. Compared to 1986, when I entered DLR, those are quantum steps in all aspects.”

The gap between pre-design comprehensive codes with short computation times and CFD optimization with lengthy processing may be filled by physics-based, semi-empirical engineering models. “The flow around a fuselage has a significant impact on rotor blade airloads,” said van der Wall. “Using CFD for a handful of conditions as a ‘numerical wind tunnel,’ I developed a simple parameterized analytical model to account for it in comprehensive codes capable of real-time simulation. The impact of rotor downwash on fuselage airloads could be tackled the same way.” Innovative UAM configurations pose new modeling challenges. “Commercial operation with paying customers requires certification and the same safety as in commercial aircraft operations. That’s very different from a sports vehicle in the ultra-light class. I expect only a few of these concepts to survive, if at all, and it will take a couple of more years until you can board one in routine service.”
van der Wall first joined VFS in 1989 and long served as associate editor of the Journal of the AHS. Today, he is on VFS Test & Evaluation and History Committees; he has twice won the latter committee’s Bernard L. Lindenbaum Best Historical Best Paper (Forums 72 and 76). “It is very rewarding to be in active contact with other VFS members. The conferences help refresh old and establish new contacts — an important factor missing entirely from online meetings. The conferences are also fantastic for presenting your research results and getting feedback.”

Berend G. van der Wall has long researched rotorcraft history up to 1945. “My AIAA book, Göttingen Monograph N, is about German World War II rotorcraft development. I’ve presented or co-authored several papers at the VFS History session about prominent and unknown German rotorcraft pioneers such as Küssner, Focke, Rüb, Rieseler and Schmidt. For me, it was extremely surprising how much the pioneers of rotorcraft already knew. They had no computers at all — only a slide rule, a blank piece of paper and a pencil — but they had a very profound physical understanding.”