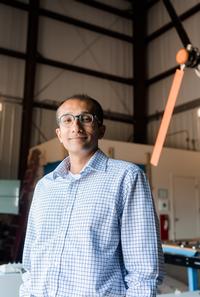 As the principal investigator for the Vertical Lift Research Center of Excellence (VLRCOE) at the University of Texas (UT) at Austin, Jayant Sirohi focuses his small team on experimental aerodynamics, structural dynamics and rotary-wing aeroelasticity. He explained, “We are sub-contracted to the University of Maryland (UMD) VLRCOE. Our specialty is that we have a coaxial contrarotating rotor test stand. We also have a couple of test stands for stacked rotors — coaxial co-rotating rotors. We do a lot of optical diagnostics — measurement of rotor wakes and blade deformation with non-contact methods — as well as loads and acoustics.”

UT Austin researchers use particle imaging velocimetry to characterize hover wakes generated by their 2-m (6.6-ft) diameter rotors in the university’s test chamber. Forward flight experiments can take the UT test stands to the UMD wind tunnel in College Park, Maryland. The current VLRCOE plan stretches through 2026 and funds two main projects. Sirohi said, “The first is to measure rotor wake in response to time-varying control inputs like cyclic pitch or step changes, basically trying to get an understanding of how rotor wake develops in maneuvering flight.” The coaxial contra-rotating rotor is one candidate for Future Vertical Lift (FVL). “We’re going to do some measurements for the Army to validate their computational tools.”

Sirohi continued, “The other project is to look at the aeromechanics of stacked rotors — two coaxial rotors that spin in the same direction at the same speed. This is a virtually new kind of rotor that has not been studied much. We’re going to look at the loads, vibrations and acoustics.” Stacked rotor research is aimed at electric vertical takeoff and landing (eVTOL) designs. “You can have each rotor on its own electric drive. We have found that, depending on what the axial and azimuthal spacing is, we can have changes in performance or noise or the thrust of the rotor system. It opens up a number of exciting opportunities that were previously not available.” Sirohi noted, “The interaction between the rotors is very, very important. How does that affect the vibration? Can you reduce the vibration in a coaxial rotor system?”

UT Austin research relates to both eVTOL and FVL. “We look at the basic aerodynamic and structural dynamic issues with the rotor,” said Sirohi. “We are doing a lot of work on our 2-m diameter rotor system. You could say that’s a scaled-down version of the main rotor on the [Sikorsky] FVL Raider or X2 technology demonstrators. On the other hand, a 2-m diameter rotor could be considered full-scale on an eVTOL vehicle. A lot of the aerodynamic issues are the same, so we don’t really distinguish the end application at this stage of the research.”

Prof. Sirohi came to the UT Austin Cockrell School of Engineering from Sikorsky Aircraft where he led design work on the Firefly electric helicopter demonstrator. “When I reached UT, I had to decide my strategy to get funding for research programs. I had been exposed to the coaxial concept at Sikorsky with the X2 and so-on. I had seen there were many unanswered questions, so I thought ‘There’s a gap in the knowledge. There’s not enough data out there.’ There are many other things that could be done in the future on this coaxial concept, so I recognized that need or that gap and decided to put my effort in that direction.”

Sirohi found an assistant professorship in the UT Austin Department of Aerospace Engineering and Engineering Mechanics. “I got lucky. They had an opening at the right time. I wanted to work on many different projects in the lab. I’m kind of a hands-on person, so I had this idea of working in the lab, trying out different things. That kind of flexibility you don’t have anywhere else outside of academia.”

Engineering Immersion
Jayant Sirohi grew up in Madras (today Chennai) on the southeast coast of India as the son of academics. Rajpal Sirohi was a physics professor at the Indian Institute of Technology (IIT) Madras, and his wife Vijayalaxmi was a systems officer with a doctorate in mathematics. “I was always surrounded by physics, mathematics and engineering books,” recalled the UT Austin researcher. “Science and engineering were part of daily life. Somehow I was drawn to mechanical engineering and from there to aerospace, aviation.”

IIT Madras offered both mechanical and aerospace engineering studies. “At the time there were five Institutes of Technology, and I think four of them had aerospace engineering programs.” The hometown aerospace curriculum focused on fixed-wing science, but Sirohi found an early opportunity to do hands-on research. “I was helping a professor there build an experimental setup and do some measurements on wave energy harvesting,” he recalled. “There was no class in rotary-wing aviation. I really didn’t do any rotary-wing until I came to the US, to the University of Maryland.”

Sirohi applied to UMD and other American graduate schools. He explained, “Maryland had this very interesting program in smart structures that combined mechanical engineering, structures and electronics, subjects I was interested in. And they also gave me a full research assistantship, so everything was paid for.” The Alfred Gessow Rotorcraft Center at UMD proved influential. “I came to Maryland to work on smart structures, and then I realized there was a rotorcraft center there. I was surrounded by helicopter people. They were doing experiments and analysis on all kinds of helicopters and tiltrotors. I just got more and more fascinated with helicopters, and then I really wanted to work in the industry after I graduated.”

Sirohi earned his Masters of Science in aerospace engineering at UMD in 1998 and his doctorate in 2002. He remained a postgraduate assistant research scientist at College Park until 2007. “My mentor was my advisor, Professor Inderjit Chopra. He encouraged me to go into academia, but I was determined to get some experience in industry before I went to academia.”

Dr. Sirohi became a staff engineer at Sikorsky Aircraft in the advanced concepts group. “That group generated designs for the X2 demonstrator. I was a bit too late to participate in the X2 design or flight testing, but I worked on other things.” One rotor research effort looked at flow control where a channel in the blade blew air on the retreating edge. “The goal was to modify the stall boundaries. I did some calculations, and it took off from there. It looked very promising, so they were able to get some government funding. They went on to build a rotor and do a wind tunnel test.” As technical lead for analytical design tools, Sirohi also developed and managed conceptual design codes.

Structures and Flows
UT Austin allowed Sirohi to pursue other innovative concepts. “It’s kind of a strategy,” he observed. “You have certain skills. There’s money available for certain research topics. Sometimes you get lucky; sometimes you don’t, but ultimately you have to apply for funding. Whether the funding agency gives me the money or not depends on the funding agency priorities, my competency in that area, my track record, my idea.” Sirohi added, “I have some discretionary funds as a faculty member. If I want to try something out without external funding, I’m free to do that.”

Professor Sirohi teaches undergraduate courses in structural dynamics and instrumentation, and graduate classes in rotary-wing aeromechanics, structural dynamics and advanced dynamics. The VLRCOE teams the faculty researcher with graduate and undergraduate students. “Most of my research is in rotary-wing experimental dynamics and aeroelasticity.” The Air Force briefly funded work on autorotative cargo delivery. “Instead of having a parachute, you can have a rotor that autorotates to basically fly your payload down to where you want it.”

Not all of Sirohi’s research at UT Austin involves rotors. “I also have some NASA funding to look at aeroelasticity in the supersonic and hypersonic regime, using structural deformation measurements to estimate what the loads are on a missile for better control.” Not all research is meant to fly. Large ground structures such as poles and power lines vibrate in the wind, and Sirohi explained, “I’m working on energy harvesting using aeroelastic instabilities. What we’re doing is putting some piezoelectric materials on structures to convert vibration to energy. We can harness that energy and store it.” Instead of replaceable batteries, energy generated and stored by vibrating bridges, for example, could power structural monitoring devices to reduce maintenance costs.

The eVTOL revolution provides new opportunities. “Essentially, you can get power where you want without a mechanical driveshaft,” Sirohi explained. “For the stacked rotor, we can have each rotor connected to an individual electric motor and drive them at different speeds, change the index angle, do things that would be very difficult to do with a conventional drive system.”

Distributed electric propulsion nevertheless poses questions. “There are many aeroelastic and aerodynamic issues because now you have many rotors working in close proximity to each other and to the lifting surfaces. What are the interactions between the rotors and between the airframe? If you are looking at applications like urban air mobility, a big issue is safety on the ground. You have all these spinning rotors, all this downwash from rotors and ducted fans and all these people on the ground — flight crew, maintenance crew, passengers. How are you going to keep them safe from spinning rotors? How do you keep the aircraft safe from damage and ensure reliability? I think there are a number of those issues that may be cause for stopping and thinking about urban air mobility. I don’t think there’s anything technologically that stops it from happening.”

Questions determine where to invest. Sirohi said, “Given the fact that many wind tunnels are being shut down, I think you cannot underestimate the value of having a good wind tunnel. I’m not saying that because I’m an experimental person, but unless you test something out, you don’t have the confidence it’s going to work the way you want. Your analysis can show you it works well, but I think It’s essential to test it out, first in the wind tunnel, then in a flight vehicle. Computational tools are absolutely necessary, but they all go hand-in-hand. That’s how together the state of the art is going to be advanced.”

Jayant Sirohi joined the Vertical Flight Society (then the American Helicopter Society International) as a graduate student and received a Vertical Flight Foundation (VFF) scholarship in 2000. He subsequently earned bestpaper awards with investigations of an extremely flexible stowable rotor and a micro air vehicle controlled by an active flexible structure. Sirohi served as technical chair for VFS Forum 73 in 2017 and reflected, “I think the payoff is the network that you build. You have so many people associated with this Society, which has a very rich history. You learn from all of them.”