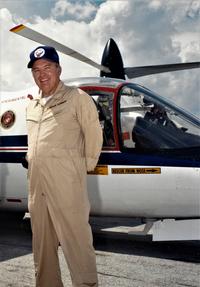 Dorman Arthur Cannon, 87, passed away on July 4. Cannon was born on Aug. 19, 1933, and graduated from Texas Christian University (TCU). He joined the US Marine Corps and became a helicopter pilot and flight Instructor. After his service, he joined Bell Helicopter and eventually became the Bell Chief Test Pilot.

He was admired for his accomplishments developing and flying the XV-15 and V-22 tiltrotor aircraft. Cannon and Ronald G. Erhart made the first flight on the XV-15 Tilt Rotor Research Aircraft (TRRA) on May 3, 1977. VFS presented the two with the 1980 Frederick L. Feinberg award, given to pilots who demonstrated outstanding skills or achievement. The citation read:

Cannon and Erhart received the Ivan Kincheloe Award for Outstanding Contribution by the Society of Experimental Test Pilots (SETP) in 1980 for flights in the XV-15. Dorman also received the Harmon International Trophy for the most outstanding achievement in 1982, presented by President Ronald Reagan in the White House Oval Office.

According to his obituary, “He had a passion for dove hunting and competitive skeet shooting. He was known for his ‘golden hands’ while flying, high intellect, quick wit, and strong willed spirit. He was a great American Patriot.”