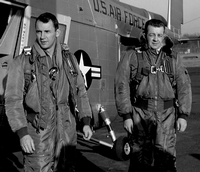 Walter J. Hodgson was an accomplished helicopter and VTOL pilot / experimental test pilot, initially for the US Air Force, and then for Hughes Helicopters, beginning in 1966. He was killed on Dec. 27, 1978 at age 54 in a crash near Thermal, California. Hodgson was flying an experimental version of the Hughes 500D helicopter at high speed, testing ways to improve its performance. Hodgson had more than 9,000 hours flying helicopters and 2,000 hours in fixed-wing aircraft.

Hodgson was one of only two people to ever win the VFS Frederick L. Feinberg Award twice, which is given to a pilot or crew who has demonstrated outstanding skills or achievement (the other being Roy Hopkins of Bell).

On Dec. 9, 1959, US Air Force test pilot Captain Hodgson and Major William J. Davis flew a Kaman H-43B Huskie (Air Force tail number 58-1848), to an altitude of 29,845 ft (9,097 m), setting a Fédération Aéronautique Internationale (FAI) World Record for Altitude Without Payload (see photo, with Hodgson on the left). The flight was made at Kaman headquarters in Bloomfield, Connecticut; it was the first helicopter altitude record with two pilots on board. Hodgson and Davis were presented with the Feinberg Award in May 1960 at Forum 16 in Washington, DC.

For his work at Hughes Helicopters and his tragic final flight, he was again selected for the VFS Feinberg Award, accepted posthumously by his wife at Forum 35 in May 1979.