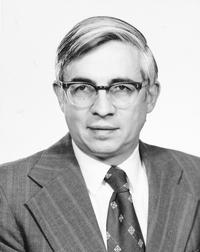 Stanley Martin, Jr., Bell V-22 Technical Director (Past VFS Chair of the Board), earned his student flight certificate at the age of 16 in a Piper Cub and ultimately received his commercial certificate in fixed- and rotary-wing aircraft. He was qualified in multiple aircraft types, including the Bell Model 47 and 206 Jet Ranger. Martin served two years of active duty as an Air Force officer at the then-Wright Air Development Center in Dayton, Ohio, where he tested helicopter rotor systems and managed several aeronautical research programs.

Martin joined Bell Helicopter Company in 1950 where he spent his entire career, highlighted by international assignments to Italy and Germany. He was instrumental in the design and production of the AB.102 helicopter as part of a Bell contract with the Agusta Company that resulted in the first-ever commercially certified helicopter in Italy in 1960. In Germany, Martin and the Bell team established the coproduction of 352 helicopters and formed Bell Aerospace GmbH, in collaboration with several Germany aeronautical firms. He held numerous technical engineering positions, including Vice President of Production Operations for Bell’s subsidiarity in Iran (terminated in 1979), and his proudest achievement, management of the technical scope on the V-22 tiltrotor from inception of the Bell Boeing teaming agreement in 1982 until his retirement as V-22 Technical Director in 1991. His work positioned the V-22 for transition to become a workhorse for the Marine Corps, Air Force, Navy and Japan.

Martin was active in many organizations that promoted the rotorcraft industry, including the Aeronautics and Space Engineering Board of the National Research Council. He served as President and then Chairman of the then-American Helicopter Society (AHS), and was a past technical author. In May 1992, he was awarded the Society’s Paul E. Haueter Award for his contributions to non-helicopter vertical takeoff and landing (VTOL) aircraft development. Separately, he was appointed the rotorcraft industry representative on the NASA Aeronautics Advisory Committee (AAC) and was selected by NASA to chair the ad hoc AAC committee recommending a civil tiltrotor research program.

Stanley Martin, Jr., passed away on May 24, 2022, at the age of 93. His life was defined by a life-long passion for aviation, strong sense of adventure, and the love for his family.