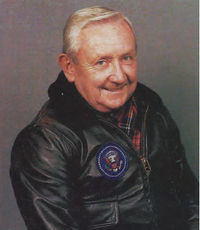 Harry M. Hleva was born on June 10, 1919, in Bridgeport, Connecticut, to John Hleva and Anastasia Darmola. Hleva started his career with Vought Sikorsky Aircraft in 1940 as an aircraft mechanic working on the flying boats. He joined the US Army in 1943 during World War II and was wounded in action, earning a Purple Heart Medal.

After the War, he returned to Sikorsky Aircraft and became the Crew Chief for the S-51 (R-5/H-5) company, demonstrator. He subsequently joined the Sikorsky Field Service Department and was eventually promoted to the Eastern Area Field Service Supervisor responsible for customer support in the areas.

In 2013, Sikorsky initiated the “Harry Hleva Award” for its superior Field Service Representatives.

He retired in 1977, only to return a decade later to lead the restoration of the VS-44A flying boat “Excambian,” on which he had worked early in his career; the completion of this 10-year project was one of his proudest moments. Hleva was called “truly a living ‘archive’ of Sikorsky.” Towards the conclusion of the restoration project, the Igor I. Sikorsky Historical Archives were founded, in 1995. Hleva served as the first director of the Sikorsky Historical Archives and remained a Senior Advisor to the archives. Hleva, with Sergei Sikorsky, accepted the AHS John J. Schneider Historical Achievement Award on behalf of the Sikorsky Archives at Forum 62 in May 2006.

Harry M. Helva of Stratford, Connecticut, passed away on Monday, October 12, 2015, at the age of 96. He had a 36-year career with Sikorsky Aircraft, and about as long associated with preserving and archiving the Sikorsky legacy.